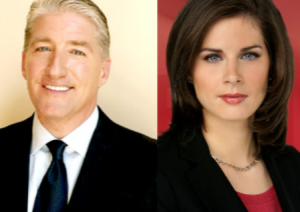 Is John King a “dead man walking” at CNN? The New York Post seems to think so. In a series of short blurbs over the last few months–the most recent just today–the News Corp.-owned paper has at times hinted, and at other times flat-out reported that King was losing his signature 7 p.m. show. “We hear that CNN development execs are creating a daily news show for her to air from New York at 7 p.m., a switch from business to breaking news,” reads the PAGE SIX story. “Burnett’s show launches in June and will replace John King USA.”

Today’s story follows a similarly grim report on King’s future in the Post back in March, which declared “John King is the next head likely to roll at CNN,” and suggested a pilot was in the works with Soledad O’Brien as a replacement. As we reported then, the Post‘s story came within a day of a similar report in Murdoch’s Wall Street Journal that tied rumors of King’s demise to CNN’s “interest” in then-CBS Evening News anchor Katie Couric.

In each story, the motive for ditching King is “low ratings.” But even a quick look at ratings this year for John King, USA show the show growing–and competing strongly against the competition. For the month, the quarter, and the year to date, JK USA‘s beating MSBNC’s Chris Matthews. On May 5th, King not only beat Matthews, but his ratings (433,000 viewers 25-54) were impressive even compared to Fox News’ Shepard Smith (530,000). King also outperformed CNN’s In the Arena and Piers Morgan Tonight. Last Friday, King again beat Matthews, and had the second-highest-rated hour on CNN behind Anderson Cooper.

Clearly CNN has high-profile plans for Erin Burnett, and that means building a show around her. CNN says development on the yet-to-be-named program will begin “in a few weeks.” But with a major election season looming, and ratings holding, King’s not necessarily the obvious choice to be shifted to make room for Burnett. A CNN rep says the network has “no plans to make changes to John King, USA—the audience is up 68 percent for the month vs. a year ago and we look forward to its continued progress as the program takes on an important role in our 2012 campaign coverage.”