Is Hillary The ‘Most Qualified’ Candidate For 2016? The Five Hosts Battle Over Pelosi’s Praise
VIDEO

Is Hillary The ‘Most Qualified’ Candidate For 2016? The Five Hosts Battle Over Pelosi’s Praise 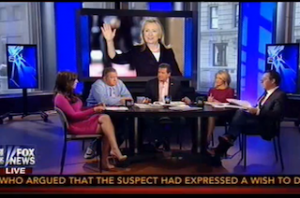 With Alex Wagner‘s MSNBC panel taking Canadian-born Ted Cruz‘s 2016 prospects down a peg earlier today, it was only fitting that Fox News’ The Five took on Hillary Clinton this afternoon. Eric Bolling kicked off the discussion by playing some of what House Minority Leader Nancy Pelosi recently had to say about Clinton and asking if the former first lady and secretary of state is really the “most qualified” person, of either gender, for the job.

The question sparked a serious debate between two of Bolling’s co-hosts, Andrea Tantaros on the right and Bob Beckel on the left. “Based on what?” Tantaros asked, referring to Pelosi’s assertion that Clinton is the “most qualified” person for the job. “I’m looking for these big accomplishments that Hillary Clinton has done. In fact, her tenure at the State Department was nothing short–and I’m going to say it, based on Benghazi–a failure.” She predicted that if Clinton does run in 2016 the media will ignore her role in the Benghazi attack and “it will not be an issue.”

“I’m going to take exception to what you said about her being a failure,” Beckel responded. “I can’t think of a secretary of state who has been a better success in many ways,” he said, pointing to the strength of NATO and relations with the Pacific Rim countries. “She has taken the case for women around the world and done a very good job with it. She has handled a number of things and kept the United States at the forefront at the time we were slipping.”

Tantaros again brought up Benghazi and asked “what was so great about her tenure, her dance moves in the Congo?”

Finally, Bolling jumped back in the mix, saying that “one of the most important attributes to being president is military service.” He highlighted the fact that Presidents Obama and Bill Clinton did not have military service on their resumes, while the last three Republican presidents did, even if George W. Bush just spent a handful of years in the Texas Air National Guard. Hillary Clinton did not serve in the military, but as Beckel pointed out, she did sit on the Senate Armed Services Committee.