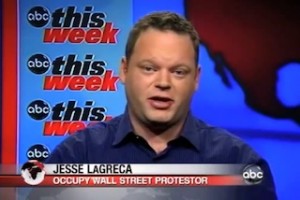 It started as just a minor “gotcha” moment–a YouTube clip of an Occupy Wall Street protester criticizing Fox News coverage of the movement to Griff Jenkins popped up on the Internet, as these things tend to do. It was later discovered that the protester was Jesse LaGreca, a Daily Kos blogger. On Sunday, LaGreca appeared on ABC’s This Week to talk about the protests, and–agree with his point of view or not–he came across as well-spoken, smart, and level-headed, which seems to be an outlier from the blanket media coverage of an OWS supposedly littered with uninformed, anarchist, silly sign-holding masses.

LaGreca made a point to say that he doesn’t want this movement to turn into an anti-government protest–it’s actually just the opposite:

LaGreca’s best quote was when he said he’s likely the only working class person who will appear on the Sunday news; his quick answers and honest presentation may just keep bookers putting him on throughout the week. And this is exactly what OWS needs. While Priscilla Grim and her anonymous collaborator, Chris, may be ultimately credited with starting the movement, LaGreca has a television presence and a measured tone that gives OWS a sense of camera-friendliness and accessibility, something they sorely need. The movement has been generally portrayed as leaderless; a collection of angry protesters hanging out in New York, shouting and rallying against whatever they find to be an injustice. Most people see it as a joke.

The London Telegraph, for instance, is labeling the movement as, “little more than a fashion show masquerading as a political movement, a gathering of super-cool yoof who want to show off how hopping mad they are about bankers and war and pollution and stuff and also how fabulously dressed and adorned they are,” (based on this New York Times fashion article). LaGreca, meanwhile, is giving interviews with CBS talking about promises that were made to our grandparents that are going to be broken.” You can’t argue with the heartstring-pulling stories of 80-something war veterans struggling in this economy. And LaGreca seems to be smart enough to try to draw the attention back to them and away from daily man-on-the-street interviews with the movement’smotley crew of idiots.

Occupy Wall Street might eventually become more than just a quasi-Woodstock for this generation, but they have to focus their message. And with LaGreca’s calming presence, it might actually have a fighting chance. (H/T Observer.com)