Is Morning Joe Really in Any Position to Criticize Carly Fiorina? 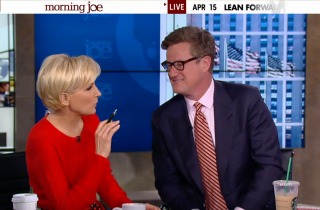 MSNBC did one very good thing and one very bad thing on Morning Joe Wednesday morning.

The good: The announcement of Ari Melber‘s promotion to Chief Legal Correspondent of MSNBC. My kudos on the move can be seen here.

And the bad: Kisses on-air for its big guest, Valerie Jarrett, President Obama’s most trusted adviser. And that just doesn’t pertain to one cast member, but every cast member sitting on-set. Hugs were on the menu as well, as co-host Joe Scarborough said to Jarrett: “Valerie! Come give me a hug!”

Imagine this exchange playing out between, say, Condi Rice during the Bush 43 presidency and any Fox host for a moment. Twitter would break.

And the worst part? Nothing will ever happen to any one of them because MSNBC Phil Griffin appears to be intimidated by his own talent. After all, any network president who wasn’t would tell all involved to take a mandatory vacation for the rest of the week, because that visual is a whole bowl of wrong. Or as one tweet aptly stated at the time: “Lots of folks kiss their pets.”

It’s just been that kind of week for MJ. On Monday, co-host Mika Brzezinski morphed into David Brock and actually questioned (in the most condescending way possible) Carly Fiorina‘s right to criticize Hillary Clinton:

I’ve been reading and listening to your criticisms of her, which really are quite searing, again, focusing on her track record of accomplishment. And I’m just wondering, when you talk about blemishes, you have an amazing round of accomplishments in your life, but someone could say it like this, you ran for Senate and lost. You worked for John McCain, you were moved off that campaign, and he lost. You had a tenure at Hewlett-Packard that a lot of people describe as extremely rocky, destroying jobs, and destroying the company’s reputation. Are you really the right person to be criticizing Hillary Clinton’s accomplishments or lack thereof?

Regardless of where you stand politically, that’s about as partisan as it gets. Huma Abedin couldn’t have written that better herself. One could wonder who Brzezinski is to be asking such a question as the co-host of a cable news program that is currently running a distant fourth in a four-horse morning show race. Is she really the appropriate person to criticize Fiorina’s accomplishments? And yes, that’s called being facetious. Then again, as Mediaite’s Andrew Kirell points out, Mika once declared at an awards show last year that she’s proud to be “a morning mainstay for the elite.”

The irony wasn’t lost on this viewer, of course, that seated on the set this morning was Steve Schmidt. If being part of losing campaigns disqualifies one from any criticism of another politician, Brzezinski might want to look at Schmidt’s track record.

1995: Managed the unsuccessful campaign for Kentucky Attorney General of Will Scott.

2008: Ran the McCain team Fiorina was on. You know, the same one Mika mentioned in the aforementioned lecture/question.

Media trust is at an all-time low, according to Gallup. Maybe it’s because no less than 30 former media members have joined the Obama administration since he took office in 2009. The bridge between media and political positions has always been there regardless of the party who controls the White House. But 30 is a ridiculous number. Then again, it’s not as ridiculous as the scene at 30 Rock this morning.

Next time, a hello and handshake will do.

Save the kisses and the hugs for all of those equally-insulting off-the-record meetings instead.