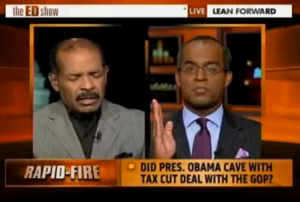 Remember junior high? How the punky kids would always go out of their way to poke and tease the kid who really just wanted to do his homework and otherwise be left alone? Watching political “Rapid Fire” segments on MSNBC’s Ed Show with Ron Christie sure seem a lot like those junior high cafeteria moments, and Christie may be the guy getting punked.

How to describe Ron Christie? He’s an MSNBC regular, a Republican, and he’s, well–he’s not a shouter, let’s put it that way. He’s the schoolkid who enjoys class much more than recess.

So why do the producers of Ed Schultz‘s show seem to delight in pitting Christie against the most over the top Democratic characters they can find?

On Monday night’s show, the producers paired up Christie with radio host Joe Madison to talk about the Bush tax cuts. Result? Christie was quiet and thoughtful, (“I think it’s an American people victory”) and Madison suggested Democrats should, well, turn the damn town upside down:

We ought to be in the streets. We ought to be jumping on these greedy Republicans who have the audacity to try to keep going what they had going on for the last ten years. Here’s what I would tell Republicans: okay, baby, it’s in your court right now. Create the jobs. And you’ve got 13 months to get these people off unemployment that you’ve held hostage…Ron is full of it. This is an attempt to just allow rich people to maintain their hundred thousand three hundred thousand four hundred thousand. Create jobs or shut the hell up.

The debate diverts quickly from the issue to name calling, and Christie’s set up as the kid who can’t quite defend himself against all the punches and name calling. It becomes entertaining TV, if you enjoy seeing people sandbagged and shouting over each other, which was perfectly on display in an outrageously over the top Ed Show segment with Ron Christie that seemed to send Christie to his wit’s end.

If these segments are meant to inform, they’re failing. If they’re meant to be professional wrestling style entertainment with a wrestler taking on a bookworm, they work. But Christie’s getting punked.