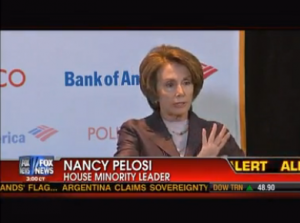 On his Fox News show today, host Neil Cavuto reported on the smoke bomb that was tossed over the White House fence last night during an Occupy demonstration in DC. This comes at a time, he added, when House Minority Leader Nancy Pelosi is attempting to distance herself from the ongoing Occupy movement.

He showed a clip of Pelosi saying that, as opposed to the Tea Party’s relationship to the Republican party, Democrats don’t have a clear ideological connection to the Occupy movement.

“But wait a minute…” Cavuto continued. Wasn’t this the very same Nancy Pelosi who once said “God bless [the Occupy protesters] for their spontaneity,” and who opined that “we must give that 99 percent a stronger voice” and work harder to “empower” them?

Well, look, the President once said that we’re on their side, he’s adopted the language of Occupy — one of his spokesmen yesterday [said] he used the term “99 percent,” he often used the term “millionaires and billionaires,” you just saw what Nancy Pelosi said. There’s many other examples. And the fact of the matter is it wasn’t just yesterday the Occupy movement turned violent. There’s been plenty of examples of sexual violence in these Occupy camps. I think there’s been five dozen arrests just at the Washington DC Occupy camp up through January 3rd; I’m sure there’s been several since then as well. So I don’t think the Democrats can escape being associated with this. With their own words, they tied themselves to it.

As Cavuto sees it, the Democrats aligned themselves with the movement when it attacked what are deemed to be primarily “Republican institutions,” but, now that they targeted the home of a Democratic president, they want to distance themselves.