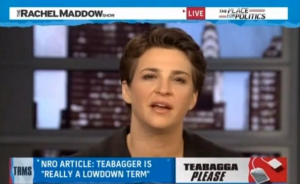 Last night on her show, pegged to the news of rival factions of the Tea Party Movement sort of squaring off, Rachel Maddow dedicated an entire segment to tracing the etymological history of the right-wing campaign. In addition to the “often entertaining in-fighting among all of the warring tea party factions,” Maddow noted, a new question has come to the forefront: “Should the Tea Party folks really be calling themselves ‘teabaggers?'”

In an op-ed entitled “Rise of an Epithet,” the National Review Online‘s Jay Nordlinger argues that the derivation and connotation of the word “teabagger” may be detrimental to the cause. After all, its sexual nature was chuckled about even on the mainstream news, and to the left it has become a go-to putdown (albeit one that was handed to those smarmy liberals on a silver platter — just like their lattes, naturally). Nordlinger writes:

In any event, it may well be too late to purge “teabagger” from our discourse, certainly from discourse controlled by liberals. But I’m for giving it a try: for running “teabagger” out of town, even at this late date. It is really a lowdown term. “Tea partier” is a neutral term. “Tea-party patriots” is a positive term, used by some of the protesters themselves. “Teabagger” — not so positive, and not so neutral.

“To ‘teabag’ or not to ‘teabag?'” Nordlinger asks, before wondering if this terms was, in fact, “kind of a conservative N-word.” Maybe! But Maddow’s not so sure. And sick of being blamed for the use of the term as a pejorative, Maddow “set the record straight” with an “adult” segment. Get the kids out of the room, she warns, before showing a clip from the John Waters cult classic Pecker.

It gets real. And includes testicles. But not David Shuster’s, who also appears to discuss the term. Check out the full clip below: