Is The Media ‘Fearful’ Of Taking On Rising Gas Prices Under Barack Obama?
Video

Is The Media ‘Fearful’ Of Taking On Rising Gas Prices Under Barack Obama? 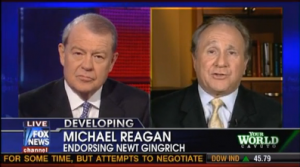 Has the mainstream media been giving President Barack Obama a pass when it comes to rising gas prices? Economic reporter Stuart Varney, sitting in for Neil Cavuto on Monday, noticed that major U.S. newspapers carried but a single story about soaring prices at the pump… dated March 8, 2011 and running under the headline “U.S. Economy is Better Prepared for Rising Gas Costs.”

Compare this, he said, to rising (but still comparatively cheaper) prices under President George W. Bush. When Bush was in the White House, the very same paper, The New York Times, ran an August 17, 2005 story titled “Economy Shows Sign of Strain from Oil Prices.”

Varney invited radio host and GOP strategist Michael Reagan onto the show to discuss whether this is an example of the media “playing sides.” These outlets know “exactly what they’re doing here,” said Reagan. “They’re pushing up their candidate.” In fact, he added, the only place you’re going to find a story on the rise in gas prices is on, well. Fox News!

Varney also noted that there has been a distinct shift in tone when it’s come to the media’s reporting on Bush versus Obama. Reagan was inclined to agree, but added that he thinks there are “a lot of people just fearful of taking on this White House.”

But what is the alternative? GOP presidential hopeful Newt Gingrich, for one, has promised prices as low as $2.50 per gallon as long as we focus our efforts on domestic drilling. Reagan, a Gingrich supporter, thinks that number is totally doable. Plus, he joked, it’s a better issue for Gingrich to promote than, say, oh… a base on the moon.