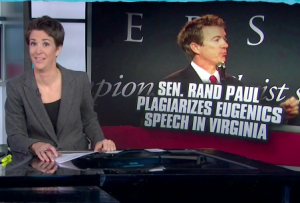 Sometimes political candidates screw up on the campaign trail. They might make a gaffe or two during a speech, but it’s the rare politician indeed who plagiarizes off of WIkpedia. And that’s exactly what Rachel Maddow caught Senator Rand Paul doing at a speech in Virginia, in which he lifted parts of the Wikipedia entry on… the movie Gattaca.

Maddow found this to be obviously strange, especially coming from someone “trying to be a candidate for president, which Rand Paul’s trying to do, and thinking that you’re going to get away from lifting your speeches from Wikipedia while you’re doing that.”

How blatant was the plagiarism? Well, here’s quotes from Paul’s speech, paired with direct language from the Wikipedia entry on the 1997 science fiction movie.

Rand Paul: “In the movie Gattaca––in the not-too-distant future, eugenics is common. And DNA plays a primary role in determining your social class.”

Wikipedia: “In the not-too-distant future, liberal eugenics is common and DNA plays the primary role in determining social class.”

Rand Paul: “Due to frequent screenings, Vincent faces genetic discrimination and prejudice. The only way to achieve his dream of being an astronaut is he has to become what’s called a ‘borrowed ladder.'”

Wikipedia: “Due to frequent screening, Vincent faces genetic discrimination and prejudice. The only way he can achieve his dream of becoming an astronaut is to become a ‘borrowed ladder.'”