Is This The Worst “Ground Zero Mosque” Debate Ever? 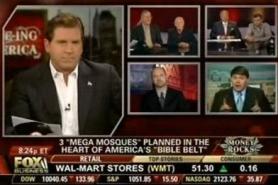 Last night I stumbled across what might be one of the worst “Ground Zero Mosque” debates ever.

There are many reasons for this, which we’ll lay out. And it doesn’t really matter which side you’re on – this is something both sides can agree on. Watch the fourteen-minute Fox Business Network video and decide for yourself!

The debate stars Eric Bolling, “The Corruption Hunter” and host of Money Rocks on Fox Business Network. I think Eric’s a talented guy – and usually enjoy when he fills in for Glenn Beck or Bill O’Reilly. But this was bad. Here’s why-

• Amount of guests: There are the two sides of the debate – support and oppose. Then there are four more people. With Bolling, that makes seven guys yelling.

• Interrupting: Bolling does it throughout, as do the rest of the guests (sometimes Dietl grabs Vaynerchuk to get it done). In fairness, it’s almost impossible for Bolling not to interrupt, considering the topic and amount of guests.

• Tangential issues: At some point an entirely new Mosque-related issue is introduced. Apparently some “mega-Mosques” in Tennessee are causing an uproar as well. Why would there need to be mega-Mosques?! Bo Dietl uses this as an opportunity to warn against terror babies, “She-ra Law” some ‘video I saw’ and, for some reason, the Hunchback of Notre Dame.

• Where it’s happening: On Fox Business Network. Business. Why?

Bolling makes some good points, although I’d like it if he could hunt some corruption that’s causing the bureaucratic foot-dragging leaving it Ground Zero and not the Freedom Tower. But wow, this segment. Wow. Good luck!