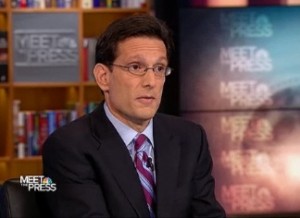 With Gov. Neil Abercrombie‘s (D-HI) now-open-ended resurrection of the Birther issue, expect to see more of the embarrassing scene that played out on Sunday morning’s Meet the Press: Republican leaders trying to distance themselves from the conspiracy theorists, without alienating them. Rep. Eric Cantor danced around host David Gregory‘s challenge to reject Birthers like an amateur snake-charmer with a bladder full of Mountain Dew. Deliberately or not, Abercrombie just might be some kind of political genius.

As I reported yesterday, Governor Abercrombie has called off his quest to end speculation about the President’s national origins, a quest that only succeeded in throwing gasoline and tin foil on the fringe meme. While such speculation might have been helpful in 2008, when the Republican ticket (and, to be fair, his Democratic opponent) loudly blew the dog whistle that then-Senator Barack Obama just ain’t like the rest of us, that same crowd now serves only to embarrass the GOP.

On Sunday’s Meet the Press, David Gregory flat-out challenged GOP House Majority Leader Eric Cantor to reject Birtherism as “crazy talk.” While Cantor refused, he did generously allow that he, personally, “believes” that the President is a US citizen. Such exchanges will do little to change minds about the President’s eligibility to be President, but will continue to highlight the degree to which Republican leaders are afraid to alienate a mockery-inviting fringe. Imagine, if you will, a prominent Democrat who refused to call 9/11 “trutherism” crazy talk (hell, Van Jones said as much and still had to resign), and you’ll begin to see how this will play out to the President’s advantage: (from MSNBC)