‘It is Exhilarating!’: GOP Rep Excited That Trump Reiterated Pledge to Build Wall 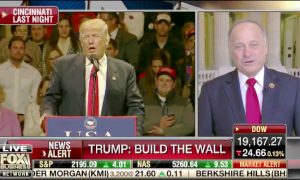 Shortly after Donald Trump won the presidential election, there were concerns among his most fervent supporters that he might quickly backtrack on one of his biggest campaign promises — to build a big beautiful wall along the Mexican border. Much of that concern came from an interview Trump gave to 60 Minutes when he said the wall could be “some fencing.”

Well, while he was at a Carrier plant in Indiana yesterday to celebrate the retention of roughly a thousand jobs, he reasserted his promise, telling the crowd “trust me, we’re going to build the wall.” And at his ‘Victory Tour’ rally in Cincinnati last night, the crowd chanted “Build the Wall” numerous times and he said they would build “a great wall.”

During an appearance on Fox Business today, this news was received rather warmly by one of Trump’s most devoted supporters, Rep. Steve King (R-IA). Speaking to host Stuart Varney, King revealed his excitement at the prospect when Varney asked him if he believes Trump will actually build it.

“he’s got to build the wall,” King said. “It is the central promise to his presidential campaign. It has been reiterated last night with utter exuberance . Not just a wall — a great wall!”

“I want to watch that day after day,” he stated. “It makes me so happy to hear such a definitive statement. It is exhilarating, Stuart!”

Watch the clip above, via Fox Business.