It Is the Duty of Every American To Go See ‘Amerigeddon’ 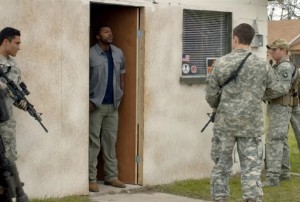 While most of America lines up to see Captain America: Civil War this weekend, the citizens of Fox Nation (in select cities) know where to find a real cinematic treat, thanks to Fox and Friends. On Thursday morning, the Fox morning show’s two-box was graced by screenwriter Gary Heavin and director Mike Norris, son of martial arts star Chuck Norris. The duo are the team behind Amerigeddon, a film that I demand every American see and turn into a huge hit. IF you’re not convinced, check out the clip Heavin and Norris brought with them to sell the flick, as well as the awesome way Heavin and Norris seem to be improvising a scene about a screenwriter who’s afraid he’ll be kicked to death if he says the wrong thing:

Now, I know what you’re thinking, but I am dead serious. Yes, Amerigeddon looks like a low-to-mid-budgeted moving x-ray of Alex Jones’ brain, but I am totally serious, if I lived anywhere near one of the 28 theaters where the flick is opening tomorrow, I’d already be on line. Like many of my contemporaries, I grew up on terrible movies, and later, the MST 3000 treatment of those movies, and I’m sure we have all  been frustrated by the decades-long decline in the “tastic” quotient in “crap-tastic” movies. These days, B-movies are mostly relegated to TV, and all feature a “knowing” self-consciousness that’s supposed to pass for cleverness, but stopped being interesting five minutes into Howard the Duck.

There’s not a trace of that tired irony or insincerity anywhere in that scene from Amerigeddon, or in the film’s official trailer, but rather the dead-serious belief in itself that infuses all of the truly great B movies. Not sold yet? I’ve got two words for you: Dina Meyer, the criminally overlooked bad girl from Paul Verhoeven‘s Starship Troopers.

We’ve all been burned by sincere right-wing fever dreams before, like the woefully unfulfilled promise of Nic Cage in a Left Behind movie, but if we don’t take a chance on films like Amerigeddon, we deserve all the Sharknados we get.