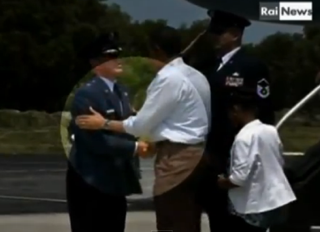 Apparently this is what happens when the media can no longer accuse President Obama of having shady information on his birth certificate. The Italian journalists at RAI News “caught” President Obama possibly trading tiny slips of paper with an Air Force general, about two hours after he is said to have approved the raid that killed Osama bin Laden. “It literally appears that they are exchanging information!” the anchor breathlessly chronicles.

The scene is Cape Canaveral, Florida, where the President has landed after a visit to Alabama and merely hours after authorizing the raid that killed bin Laden. The RAI journalist gives the play-by-play of Obama walking out of the plane, taking care as he walked down each step, daughter in tow, and ultimately slipping a piece of paper into his wrist and shaking hands with an Air Force general on the bottom. The general does the same, taking a paper out of his pocket and slyly fitting it into the palm of his hand. “It literally appears that they are exchanging information through the papers!” the newscaster concluded. It’s like something James Bond would do!

While the journalist dares not venture a guess as to what kind of information is being transferred, he does note that the timing is strange, as is the mode of transporting information. If not as exciting as the sort of concealed information some thought they would find out about on the birth certificate, it does add to the mystique of the President as a person who can walk and chew gum at the same time– or, put slightly more hyperbolically, an “efficient, steely-nerved, multitasking, black ninja gangsta president.”

Watch in awe as President Obama gives someone a paper and then takes a paper from them (via Breitbart.tv) below: