It’s Conservative Media, Not Liberals, Who Want to Talk About the Obama Rodeo Clown 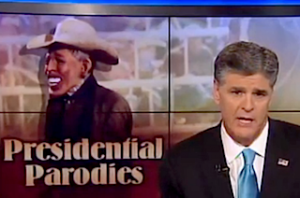 With both Congress and the president on vacation this week, the political media landscape has been searching for something–anything–to talk about. And since apparently one can only spend so much time covering the devastating violence in Egypt, one lowly rodeo clown wearing a President Obama mask has become a major topic of conversation.

But which side of the political spectrum is pushing the rodeo clown story? If you watch Fox News or listen to conservative radio, you may think that liberals are up in arms over the terribly offensive Obama rodeo clown. But in reality, it’s by and large those conservative media sources that are promoting this distraction.

It all started when video of the incident began to make its way around the internet Sunday. Missouri’s Democratic Senator Claire McCaskill was one of the first to condemn the incident, but Republican Lt. Gov. Peter Kinder actually beat her to it on Twitter. Then on Tuesday, the NAACP issued a statement calling on the Justice Department and Secret Service to review the incident. With that overreaction from the government unlikely to transpire, the whole thing would have likely disappeared like so many other odd, local stories. But then conservative media got on board.

The new narrative on this story, driven by the likes of Sean Hannity, Rush Limbaugh and Glenn Beck, was the supposed liberal outrage over the “offensive” rodeo clown. But beyond McCaskill’s comments and the NAACP, how many liberals were even still talking about this thing?

Judging by the coverage on cable news, not too many. A cursory search through the TVEyes monitoring system reveals that since Monday Fox News has aired more segments (21) on the rodeo clown than MSNBC (13) and CNN (7) combined. Hannity alone has done two full panel segments on the story, and while he was able to find someone on Tuesday who opposed the “racial” aspects of clown’s performance, by Wednesday night, he ended up with two guests who agreed the liberal criticism, wherever it may exist, is over the top.

What Hannity’s second segment on the rodeo clown below, via Fox News:

Meanwhile, The Five led with the story yesterday, but the only liberal host of the show, Bob Beckel, spent most of the segment complaining that the whole thing wasn’t worth covering.

And over on MSNBC? Two of the network’s three prime time anchors haven’t touched the story at all, with only Lawrence O’Donnell weighing in, relying on the man who first posted the photos of the Obama rodeo clown to denounce it on air. And when the Morning Joe team finally addressed the story Thursday morning, it was not to scream and yell about how offended they were, it was to mock Glenn Beck’s over-zealous response, calling him the “highest paid rodeo clown in America.”

Speaking of Beck, things weren’t much different in the world of conservative radio. Beyond Beck standing up in solidarity for rodeo clowns everywhere, Rush Limbaugh also entered the fray, comparing the nearly non-existent liberal response to “those countries reacting freakishly when there were cartoons of the Prophet Muhammad.” He accused “the left” of not being able to “laugh” or “take a joke” without exactly pointing to evidence to the contrary. He even urged the president to publicly laugh off the whole thing to show the country he has a sense of humor about himself. After all, it (sort of) worked with the birth certificate mug.

Listen to Limbaugh’s remarks on the rodeo clown below, via The Rush Limbaugh Show:

But just as Obama waited until he absolutely had to to address the “Birthers,” he has pointedly decided not to interrupt his time on Martha’s Vineyard to address the rodeo clown. His deputy press secretary Josh Earnest called the incident “not one of the finer moments” for Missouri and judging by the reaction from the conservative web (including a column on this very site), you would have thought Obama himself called for the rodeo clown to be executed.

The reality is, this wasn’t one of Missouri’s “finer moments,” but it wasn’t one of its worst either (remember Todd Akin?) But if you believe that the “outrage” over the Obama rodeo clown is coming from the left, you’ve been taking in way too much conservative media.