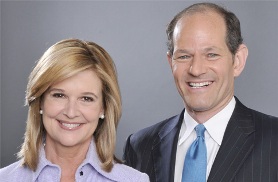 As has been speculated for about a week now, Eliot Spitzer and Kathleen Parker will be paired up as co-hosts of a new 8pmET “spirited, nightly roundtable discussion program” on CNN.

The Crossfire-like show replaces Campbell Brown‘s program – which she announced she was leaving last month.

Let’s take a look at the key players. Spitzer was a surprise regular guest on Dylan Ratigan‘s new MSNBC show starting almost one year ago today. Over this past year he’s risen through the ranks at MSNBC and began anchoring occasionally a couple months ago during news hours. He also, of course, is the former Democratic Governor of New York…and Client 9.

Parker is a conservative columnist and regular pundit on a variety of networks. She memorably called on Sarah Palin to drop out as VP candidate during the 2008 election – a column that to this day has some conservatives calling her “Republican In Name Only.”

In a fairly exhaustive Google search to find anything Parker has written about Spitzer, this was all I could come up with.

The new show will debut this fall. CNN has long maintained that prime time was a spot for objective, non-opinion programming – a differentiating trait from its cable news competitors on the left and right (during those hours). This is certainly a step in a different direction, even if the opinion is, well, fair and balanced.

Upcoming storylines: the Spitzer ‘ick’ factor, whether Parker is really a foil politically to Spitzer, CNN’s drift toward opinion, whether this is a Crossfire revival, what longtime CNN pundits feel about being passed over for two newbies for the slot, what show will eventually air after the 8pmET hour…

> Update: “This will not work. Maybe better than what they had…but it won’t really work. They needed to pick a single host who had something really interesting and compelling to say. Picking one person on “each side” is a cop out. I give it a year.”

Spitzer, a legendary prosecutor and progressive governor, and Parker, an iconoclastic conservative commentator, will host a dynamic exchange of opinions and analyses – their own, and those of their guests and regular contributors – on the most important, compelling and amusing stories of the day.

“Other cable news channels force-feed viewers one narrow, predictable point of view; in contrast, CNN will be offering a lively roundup of all the best ideas – presented by two of the most intelligent and outspoken figures in the country,” said Klein. “Eliot and Kathleen are beholden to no vested interest – in fact, quite the opposite: they are renowned for taking on the most powerful targets and most important causes.”

Parker is one of the nation’s most prolific and popular opinion columnists, appearing twice weekly in more than 400 newspapers. A self-described “rational” conservative, she is known to take a common sense approach to life and writes with humor and wit. In May she was awarded the 2010 Pulitzer Prize for Commentary for her political opinion columns, which she launched in 1987 while a staff writer for the Orlando Sentinel. It was nationally syndicated in 1995 and she joined the Washington Post Writers Group in 2006. She has written for magazines including the Weekly Standard, Time, Town & Country, Cosmopolitan and Fortune Small Business, and is a contributor to The Daily Beast. She also serves on USA Today’s board of contributors and writes occasionally for the paper’s op-ed page. In 1993 she won the H.L. Mencken writing award and in 2004 and 2005 she was named one of the country’s Top Five Columnists by The Week.

“As a veteran print journalist, I am appropriately respectful of the challenges posed by the medium,” said Parker. “But I’m thrilled by the opportunity to discuss the issues that matter to me —and that aren’t heard often enough on television—in a conversation with one of the nation’s most brilliant, fearless and original thinkers. With Eliot Spitzer as my co-host, Wall Street and Main Street will finally meet. It can’t possibly be boring.”

Spitzer, a renowned prosecutor and former Governor of the State of New York, is frequently referred to as the “Sheriff of Wall Street,” having prosecuted abuses among major Wall Street firms as well as numerous other industries, both as a young lawyer and as New York State Attorney General. As Attorney General from 1998 to 2006, Spitzer led several high-profile cases battling corruption throughout the financial services sector and led groundbreaking cases in the areas of environmental protection and civil rights enforcement. As Governor, Spitzer restructured New York’s system of education finance, began the process of fundamental health care reform and focused economic development on New York’s upstate economy.

Spitzer was born and raised in the Bronx and is a graduate of Princeton University and Harvard Law School, where he was an editor of the Harvard Law Review. Following law school, Spitzer clerked for Federal District Judge Robert W. Sweet; was an Assistant District Attorney in the Manhattan District Attorney’s office, where he prosecuted organized crime and political corruption cases; and worked at several prominent private law firms. Spitzer is currently a contributor to Slate.com.

“Kathleen is an extraordinary intellect whose sharp observations and wit are certain to resonate with viewers,” said Spitzer. “I look forward to working alongside her in a discussion that will inform, challenge, and entertain. I am grateful to CNN for the opportunity to co-host a show that will advance the discussion of the defining issues of our time.”