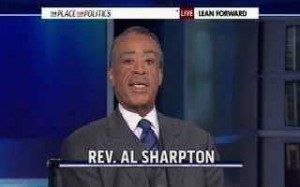 Well that was quick. Just after a few weeks of what seemed like a trial period, Reverend Al Sharpton has been named the permanent host of PoliticsNation, the new 6PM weeknight show on MSNBC. In the last few weeks, Sharpton has earned a fair amount of attention, though not all of it has been praiseworthy. See the full press release below:

NEW YORK – August 23, 2011 – Reverend Al Sharpton, the civil rights activist and minister, has been named host of “PoliticsNation,” a nightly program airing weeknights live at 6 p.m. ET on MSNBC. The announcement was made by Phil Griffin, President of MSNBC. “PoliticsNation” will debut on August 29. In his new role, Sharpton will lead a lively and informed discussion of the top headlines, bringing viewers his take on events in his signature style.

“I’ve known Rev. Sharpton for over a decade and have tremendous respect for him. He has always been one of our most thoughtful and entertaining guests,” said Griffin. “I’m thrilled that he’s now reached a point in his career where he’s able to devote himself to hosting a nightly show. ‘PoliticsNation’ is going to be an incredibly strong kick-off to our evening schedule.”

In addition to being a frequent guest on MSNBC throughout the network’s history, Rev. Sharpton has also served as an occasional guest host on several programs, most recently on “MSNBC Live at 6PM” and “The Ed Show.” He joins the network at a time where MSNBC has experienced tremendous ratings growth, consistently topping CNN in primetime programming.

“I am very happy and honored to join the MSNBC team as we collectively try to get America to ’Lean Forward,’” said Sharpton. “It is a natural extension of my life work and growth. We all learn from our pain and stand up from our stumbling and one must either learn to lean forward or fall backwards. I’m glad they have given me the opportunity to continue my forward lean.”

With over 40 years of experience as a community leader, politician, minister and advocate, the Rev. Al Sharpton is one of America’s most-renowned civil rights leaders. Sharpton’s highly visible career began at the tender age of four when he preached his first sermon. A successful civil rights career soon followed, helping Sharpton hold such notable positions as the Youth Director of New York’s Operation Breadbasket, Director of Ministers for National Rainbow Push coalition, and founder of his own broad-based progressive civil rights organization, the National Action Network (NAN), one of the leading civil rights organizations in the world. Since its inception in 1991, NAN has expanded to encompass chapters throughout the United States and maintain important regional offices in Washington, D.C.; Atlanta, GA; Detroit, MI; Chicago, IL; Dallas, TX; Las Vegas, NV; and Los Angeles, CA. Sharpton was a candidate for the Democratic nomination for President in 2004. Rev. Sharpton also hosts a nationally syndicated radio show that broadcasts in 40 markets, five days a week. He resides in New York and has two daughters, Dominique and Ashley.