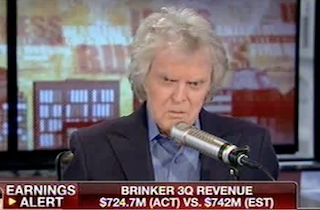 While CNN may have pulled off good ratings with their Boston coverage, the network has been widely criticized for the inaccuracies in reporting the story’s developments. Don Imus joined the crowd on Tuesday, remarking on last week’s “absurd and frustrating” coverage. He called out CNN specifically, even going after its new president, Jeff Zucker.

As a consumer, Imus expressed frustration with the news last week, given how difficult it was simply to find out the facts. Save for some analysis, Imus argued there’s no need to hear what the anchors think about the situation — adding, “These people are so melodramatic and there’s so much hyperbole, and it’s absurd and frustrating.”

Reflecting on CNN specifically, Imus recalled, “There was a time whenever something would happen, we would all turn to CNN” — “but that was a long time ago.” Noting that he himself watched NBC and Fox, Imus also pointed to the information available on Twitter, stating, of CNN, “It’s over for them.”

Later in the segment, Imus turned to Zucker, who he guessed is “a nice enough guy,” but that he “got so lucky” with Katie Couric. That success had little to do with him, he argued, but “he took all the credit.” On a personal note, Imus also mentioned that Zucker was “mean” to his friend Bob Wright. (Also, remember this?)

“Zucker was horrible to him, and I’m glad that Zucker got fired — and now he’s running them and they’re just horrible,” Imus said. In his view, the best reporter in the business, if you’re looking for the facts, is Fox News host Shepard Smith.