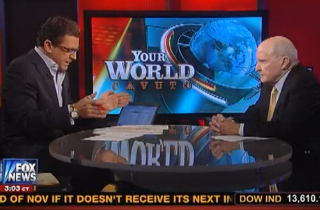 Appearing on Fox News this afternoon, former General Electric CEO Jack Welch doubled down on his allegations that the Obama administration’s September jobs report was falsified to look better than the economic reality. Standing by his remarks, Welch told guest-host Eric Bolling that he was just asking questions about Bureau of Labor Statistics methodology and felt it was too much of a coincidence for the numbers to be this good a month before President Obama is up for re-election.

“Unbelievable jobs numbers,” the former CEO wrote this morning via Twitter. “These Chicago guys will do anything…can’t debate so change numbers.” In an interview with the Wall Street Journal this afternoon, he said he “wasn’t kidding” when he made such an allegation about the Department of Labor’s unemployment figures.

“I don’t know what the right number is, but I will tell you these numbers don’t spell right when you think about where the economy is right now,” he told Bolling on Fox’s Your World.

When asked what he thinks actually happened, Welch said, “I honestly don’t know. Maybe we got the wrong measurement,” adding that many economists had predicted a higher unemployment figure.

“I tweeted last night predicting they would come in at 7.9 percent so they could be below 8 percent. The number is made up of a whole mess of assumptions,” he continued. “It just begs the question: I think there ought to be a good discussion of how this number is calculated. That is all.”

Welch and Bolling then agreed with one another that the Labor Department is full of “ideologues,” in addition to departments like the Environmental Protection Agency. Bolling pointed out that a few of the BLS economists have donated to the Obama campaign.

“You draw your own conclusions,” said Welch.

“The number has a lot room in it and it came out very favorably just one-tenth percent below when the president took office. Now, I was born in Salem, Massachusetts, and I don’t know all the ways that the fancy folks in Washington, D.C, do it, but this is a funny thing to have happen,” he continued. “Those that don’t like to agree with me say that I am old and senile but it is about asking questions: does the economy feel like the employment has improved by 6 percent in the last 60 days?”

Bolling emphasized that Welch once employed 400,000+ people, and so he can speak with authority on this subject. Welch then noted again that “this economy doesn’t feel like the employment approved to this level and maybe it is a coincidence that the month before the election we have a number that comes out one-tenth below when the president took office… from an ideologue division of the federal government.”

“Jack, I’m not a believer in coincidences,” Bolling said.