CNN anchor Jake Tapper changed his Twitter bio after President Donald Trump said no one likes him during a campaign rally, Friday.

“I’ll tell you something about CNN. Jake Tapper… I know you don’t like him. Who likes him? Who the hell could like him?” Trump declared. “I think his wife likes him actually, I really believe she does.”

“But Jake Tapper put out some things basically saying… that the new Russia thing that started yesterday, that Putin wants to be sure Trump wins, give me a break, but Jake Tapper said it aint so,” he continued. “And if he did say that… because they can turn him around, or when Zucker sees him and says, ‘Why did you put that, I want it deleted and I want you to do a different one,’ but he did say that so I respect that because it’s another hoax story.”

Following the remark, Tapper put the quote in his Twitter bio as a badge of honor. 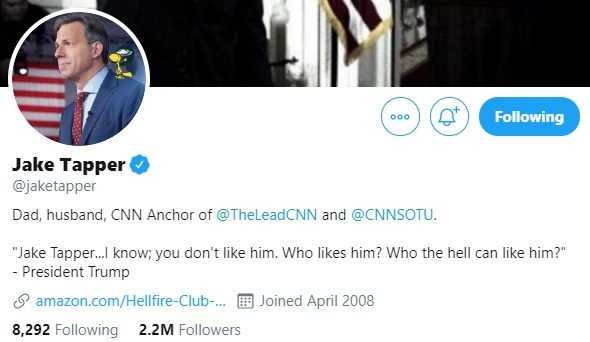 Watch above via C-SPAN.