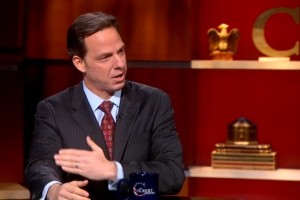 On Monday night, ABC News Chief White House Correspondent Jake Tapper made an appearance on The Colbert Report to promote his new book The Outpost: An Untold Story Of American Valor, which just debuted at number ten on the New York Times Best Sellers list, but titular fundit™ Stephen Colbert first asked Tapper to assess the prospects of the current “fiscal cliff” negotiations. Displaying a macabre sense of optimism, Tapper replied, “It’s like the movie Saw,” adding that “You have to either cut off your arm or die. So, they will cut off their arm.”

The fiscal cliff, in case you live in a cave, is a combination the deep sequester cuts that will take effect January 1st if no debt and deficit deal is reached, along with the expiration of the Bush tax cuts. The sequester was designed to be exactly the sort of mutually destructive motivator that Jigsaw designed for the players in the Saw movies, but the Bush tax cut side of the fiscal Saw movie provides the President with, at the very least, a syringe full of Novocaine to take the edge off. If no deal is reached by January 1, all of the Bush tax cuts expire, including those on individuals making more than $250,000 a year. At that point, restoring the cuts for 98% of Americans becomes significantly easier than sawing off your own arm.

Jake and Stephen spent the bulk of the interview discussing The Outpost: An Untold Story Of American Valor, which is, as Tapper explained, “about one combat outpost in Afghanistan, 14 miles from the Pakistan border, built at the bottom of three very steep mountains, built in 2006. and overrun in 2009 by the Taliban.”

Combat Outpost Keating, the subject of Tapper’s book, was originally “put there to stop the flow of weapons from Pakistan into Afghanistan, and to try to win over the locals,” Tapper explained, “but despite some successes in the three and a half years of the camp, by the end it its only purpose really was its own self-defense.”

The camp. located at the bottom of three mountains, was manned by 53 Americans when it came under attack in October of 2009, by a force of over 400 Taliban fighters. They managed to fight them off, but incurred heavy casualties, and the U.S. abandoned and bombed the base.

Tapper got the idea for the book, he says, when he was in the hospital holding his then-newborn son, Jack, and he saw a news report about Combat Outpost Keating being overrun. “I had been covering the war from the comfort of the North Lawn of the White House,” he said, “and I didn’t know as much as i needed to know about the war. And we were batting around troop numbers when they were talking about the surge, 10,000, 40,000, suddenly when are you talking about 8 dead Americans, 8 sons that I was learning about had been taken from this Earth as I was holding my new son, it became a lot more real.”

Here’s the full interview, from The Colbert Report: