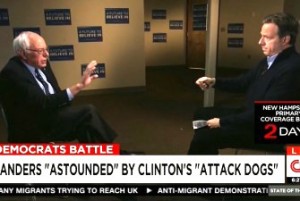 One of the problems that has dogged Bernie Sanders‘ campaign has been the behavior of some of his most fervent online supporters, first by helping to alienate the black voters that Sanders’ campaign has had trouble connecting with, and by alienating other non-white, non-male voters. The so-called “Bernie Bros” are a subset of those supporters whose favorite word, but least favorite part of the body, apparently, is “vagina.”

They’re a difficult-to-quantify yet visible part of this presidential campaign, and on Sunday morning’s State of the Union, host Jake Tapper confronted Bernie Sanders about the phenomenon, which Sanders denounced in no uncertain terms:

Tapper: Have you heard about this phenomenon “Bernie bros?” People who support you, and sometimes attack in very crude and sexist ways…

Sanders: Yeah, I have heard about it. It’s disgusting. We don’t want that crap. And we will do everything we can, and I think we have tried. Look, anybody who is supporting me is doing sexist things is — we don’t want them. I don’t want them. That is not what this campaign is about.

Republican frontrunner Donald Trump has also become known for his own set of odious followers, and while Sanders surely appreciated the chance to go on record against these trolls for Bernie, voters should ask themselves if it’s fair to tar Sanders with their actions. In the internet age, every intense candidacy has its own brand of kooky or off-putting followers, but where the rubber meets the road is in how their candidates reinforce or undermine such behavior.