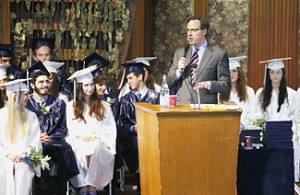 It’s that time of year when Very Important People give words of wisdom to throngs of graduating youngsters, and their sleepy, Pomp and Circumstance-narcotized relatives at graduations everywhere. Last week, ABC News Chief White House Correspondent Jake Tapper delivered the commencement address for his alma mater, the Jack M. Barrack Hebrew Academy, in the form of a media-friendly list of the “Six Things I Wish I’d Known at Age 18.”

The speech, and the accompanying story, contain a wealth of fascinating details about the reporter’s journey from high school mischief-maker (he published a subversive cartoon in the school’s yearbook that led to 75 hours of community service) to world class political journalist, and a host of world-weary, yet hopeful, observations about life, all told with the wit that Tapper’s Twitter audience has come to expect.

He opened with a series of self-deprecating jokes about the typical inattentiveness of graduation audiences. “I could literally say anything,” he said. “I could give you the my bankcode. Tell you where Jimmy Hoffa is buried. Tell you how to solve the Phillies’ pitching problem.”

Rather than spoil the speech (which you can read in its entirety here) by listing the six things Tapper wishes he’d known when he was 18, I’d like to highlight a few that had particular resonance for me. Jake Tappper is 43, if you can believe it, which makes him a year younger than I am, and like me, he got a late start in journalism. Mine started at 39, his came at the age of 26:

Let me give you a story from my own life. It took me a few years to decide what I wanted to do for a living. I was around 26 when I decided that maybe I should try journalism.

I had so many ideas, and so much enthusiasm, and I figure that with two or three good clips, freelance stories, under my belt, the Washington Post would clearly see my obvious talent and hire me.

And here’s the lesson that I want you to get: The Washington Post, or the law firm where you want to intern, or the Smith for Congress campaign, or whomever – they will hire you because you have something they want.

Don’t be depressed by the fact that the professional world ultimately operates according to self-interest.

Accept it, learn it, don’t take it personally, and be ahead of the game.

Have something that they want.

Energy. Enthusiasm. Smart observations. A great work ethic. Talent. Be the thing that they selfishly want to use to fulfill their own needs.

It’s great advice, but somewhat easier said than done. Theoretically, everyone has some kind of talent, the trick is knowing what it is. When I was sixteen, I really wanted to be a pop singer, and while I can carry a tune, my true calling was never to replace Prince as the lead singer of The Revolution.

But even knowing where your true talent lies isn’t enough:

I didn’t figure out that I wanted to be a journalist until kinda late in the game – I didn’t get my first full time job in journalism until I was 29. Now I should note – I had a job and lived on my own at the time. When opportunity knocked, in the form of the editor of Washington City Paper, it came with a substantial pay cut. But I took a chance and grabbed the opportunity as fast as I could. And I am so, so happy I did.

It was not the easy path.

All of us grown-ups know people who had dreams. But the dreams required hard work and risk. And many of them took the safer route. Most on our planet do not have the opportunities that I had. That you have. That most in this room have.

But we do. And with that comes the chance to take chances, responsible chances but chances nonetheless.

Take a chance on yourself.

The rub there, for me, was the “hard work” and “risk” part. My pop music career notwithstanding, I always knew I wanted to be a writer and a performer, and in the late 80s, embarked on about a yearlong career in stand-up comedy. I had all of the advantages; a renaissance for stand-up comics that offered paying gigs in almost every town you could throw a stone at, a group of supportive and experienced mentors, a decent talent for turning a phrase, and youthful invincibility.

I quit after that year, and I always told myself it was because I just couldn’t fight through the misery of my penultimate, awful performance, during which I bombed like a squadron of B-52s. The truth is, I wasn’t willing to put in the hard work, and wasn’t tough enough to handle the rejection, which, I can see now, was mainly caused by my unwillingness to work hard. The stage came so easily to me at first, and provided enough distractions, that I stopped working on my act.

Almost exactly 20 years later, I took a chance on a ten-bucks-a-post blogging job, and did throw in the hard work that my 19 year-old self couldn’t. While I haven’t quite reached Tapperian heights of media success, this has been a pretty decent four years and change.

In addition to talent, hard work, and toughness, though, I would add that it’s crucial to identify and nurture the right relationships. People like Jake Tapper, and a host of others, have been immeasurably helpful and supportive. If and when you do succeed, remember to pay it forward, and help the next guy coming up.