Jake Tapper Goes Off on Police Reaction in Ferguson: ‘This Doesn’t Make Any Sense!’ 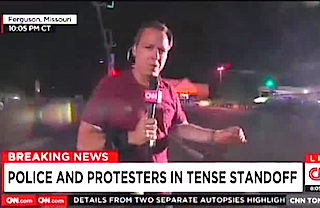 Just after 10 p.m. local time in Ferguson, Missouri Monday night, CNN’s Jake Tapper asked his cameraman to take a step back and zoom out so he could highlight what he clearly thought was the absurdity of the situation on the ground. With the National Guard and police sent in to disperse what appeared to be almost entirely peaceful protesters, an incensed Tapper told viewers what was really going on here:

Below are his full remarks:

Now I want you to look at what is going on in Ferguson, Missouri, in downtown America, okay? These are armed police, with — not machine guns — semi-automatic rifles, with batons, with shields, many of them dressed for combat. Now why they’re doing this? I don’t know. Because there is no threat going on here. None that merits this. There is none, okay? Absolutely there have been looters, absolutely over the last nine days there’s been violence, but there is nothing going on on this street right now that merits this scene out of Bagram. Nothing.

So if people wonder why the people of Ferguson, Missouri are so upset, this is part of the reason. What is this? This doesn’t make any sense.”