Jake Tapper, GOP Rep. Lay Into State Dept. for Holding No One Accountable for Benghazi 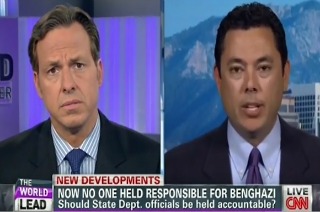 CNN host Jake Tapper reported on Tuesday that the four State Department administrators identified as sharing some responsibility for the failures which led to the deadly 2012 attack on the American consulate in Benghazi were reinstated after a brief suspension. Prior to an interview with Rep. Jason Chaffetz (R-UT), Tapper noted that even officials in President Barack Obama’s administration will acknowledge that the failure of State to provide appropriate security for assets in Benghazi is disturbing.

Tapper opened the report by noting that the State Department under Sec. John Kerry has reinstated four administrators who were suspended in connection with their involvement in the Benghazi attacks under the administration of former Sec. Hillary Clinton. The four will not receive any additional disciplinary action though they will not return to their prior positions.

“What’s notable about this move is that those decisions to not provide additional security personnel and assets in Libya, that’s one of the only parts of the Benghazi scandal that Obama officials will acknowledge was a real actual problem,” Tapper said.

“The continual denies throughout 2011 and 2012 of additional security for Ambassador Chris Stevens and the others there in Libya, that part of the Benghazi controversy no one with any real knowledge or perspective on the tragedy can refute,” he continued.

After playing a clip of a State Department security official calling his superiors the “Taliban” “inside the building,” Tapper turned to Chaffetz for his reaction to the news that no State official will be held responsible for Benghazi.

Asked what level of action against the State employees would have satisfied him, Chaffetz replied that the first step should be the capture of the perpetrators of the attack.

“But somebody, somebody at the Department of State has to be held accountable,” Chaffetz asserted. He said that it was shocking that, after three attacks in Benghazi by militants targeting Western interests in 2012 before the September 11 attack, requests for added security at the American consulate were ignored or denied.

Chaffetz cited an Accountability Review Board report which identified “29 systemic problems and challenges” in State over the course of a 60 day investigation.

“Now, how is it that they could go in in 60 days and find 29 systemic problems, where Secretary Hillary Clinton couldn’t find it in four years?” he asked. “She accepted all 29 of those, but not a single person was held accountable.”