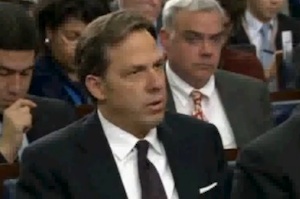 ABC News’s Jake Tapper took White House Press Secretary Jay Carney to task over a comment Vice President Joe Biden made to Newsweek, saying “the Taliban per se is not our enemy.” Tapper asked if the language Biden used was regrettable. “if taken out of context.” “It’s only regrettable when taken out of context that I just explained,” Carney responded.

RELATED: Jake Tapper And Jay Carney Get Into It Over Briefing Protocol, Bestiality Evoked Again

“And what the vice president was reflecting is that, and this is related to the reconciliation process that I was just discussing, is that the Taliban per se, while we are fighting them, it is not the elimination, the elimination of the Taliban is not the issue here. The objective that the president laid out when he laid out his Afghanistan strategy made clear that the number one principle here is to disrupt, dismantle and ultimately to defeat al-Qaeda, as well as help stabilize Afghanistan. And that’s what we’re doing.

Tapper: “I understand that. Obviously, there isn’t much of an al-Qaeda presence in Afghanistan. Leon Panetta, when he was CIA director, told me a year or two ago that there are fewer than 100 al-Qaeda operatives in Afghanistan. We’ve been devoting a great deal of blood and treasure, focused almost entirely on defeating Taliban insurgents, Taliban fighters. I understand that ultimately that there is going to have to be some sort of reconciliation. I just wonder if the language was regrettable at all?”

Carney: “It’s only regrettable when taken out of context that I just explained. It’s regrettable to present it out of context because it is a simple fact that we went into Afghanistan because of the attack on the United States on September 11, 2001. We are there now to ultimately defeat al-Qaeda, to stabilize Afghanistan and stabilize it in part so that al-Qaeda or other terrorists who have as their aim attacks on the United States cannot establish a foothold again in that country. So what is also completely clear is that Afghanistan’s future has to include within it reconciliation, and that is why we support the Afghan government-led effort there.”

Watch the contentious exchange below via CSPAN: