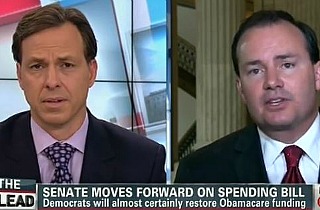 In an interview on CNN on Wednesday, The Lead host Jake Tapper grilled Sen. Mike Lee (R-UT) over his support for the efforts of Sen. Ted Cruz (R-TX) to defund the Affordable Care Act. Tapper prodded Lee over his lack of support for an individual mandate to purchase health insurance and asked the GOP senator when it became a Republican value to say “that’s okay, you can freeload?”

“Where’s the Republican bill that will solve the problem of rising health care costs and millions and millions of uninsured, making sure that insurance companies are not able to discriminate against people with pre-existing conditions?” Tapper asked Lee. “Where is the alternative to help the American people who want some sort of health care solution?”

Lee replied that there are a number of Republican solutions to the problem of rising health care costs. He referenced a series of targeted solutions before to individual problems before Tapper interrupted.

“This is the answer I get every time I ask a Republican who opposes Obamacare,” he said. “You have the majority of the House of Representatives. You obviously have a large minority in the Senate. Why aren’t you uniting behind one of the bills and trying to push it through?”

“I agree with you,” Lee replied. “We need to offer something else. Several of us have.”

“The fact we don’t yet have consensus on it doesn’t mean there isn’t good reason to protect Americans who are fearful, justifiably and understandably, for what will happen for them under Obamacare,” he continued.

“When did Republicans start saying, ‘That’s okay, you can freeload?’” Tapper pressed.

“I don’t think that’s a fair characterization of the Republican position on this at all,” Lee countered.

“If you’re against the individual mandate, or any sort of requirement that people have health insurance, then that is your position,” Tapper asserted.