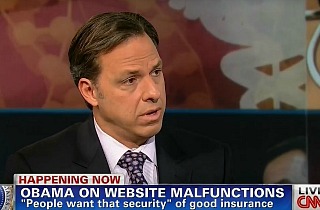 Following the conclusion of President Barack Obama’s speech on the implementation of the Affordable Care Act and the problems some people are experiencing while attempting to navigate the insurance exchanges online, a CNN panel dug into comments Obama made during that speech attacking Republicans. CNN host Jake Tapper said that the president is “resentful” of Republicans who refused to collaborate on the crafting of the ACA, forcing it to be passed with only Democratic votes.

CNN anchor Wolf Blitzer asked Tapper if he was “surprised” by Obama’s pivot to a political attack on Republicans in Congress amid his defense of the ACA’s implementation.

“No,” Tapper replied. “Because President Obama, when I was a White House correspondent when they were doing health care, and he really did — there were many efforts on Capitol Hill.”

“It passed as a partisan bill, but there were many efforts on Capitol Hill for it not to be a partisan bill, for Republican ideas to be included,” he continued. “That was a big source of frustration. And I know, in the White House obviously, the president is still resentful of the fact that Republicans were – he attempted to bring them on board to do this bill and then they were not part of it and they have been trying to block it, as we saw with the government shutdown.”