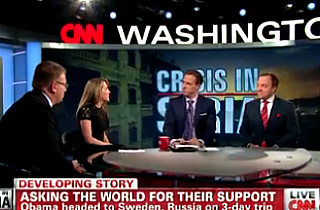 Host of CNN’s The Lead, Jake Tapper, anchored a special roundtable discussion on Tuesday night where he discussed with reporters and contributors how President Barack Obama’s push for military action in Syria is developing. Tapper observed that Obama is having difficulty assembling a coalition of international partners prepared to intervene in Syria. He noted that Obama’s efforts at assembling a coalition makes George W. Bush’s “coalition of the willing” “look like the League of Nations.”

“This makes George W. Bush’s coalition of the willing look like the League of Nations,” Tapper told CNN reporter Jessica Yellin after noting that America’s perennial partner, Great Britain, will not be supporting the U.S. in Syria.

“It is striking,” she replied. “And it’s one of these instances where you wonder if the U.S. should start to look for a different set of allies in this case.”

She suggested regional partners to support Syrian intervention like Saudi Arabia and Turkey.

RELATED: George W. Bush Talks Syria on Fox: ‘I Was Not a Fan of Mr. Assad’

Bloomberg View columnist Jeffrey Goldberg agreed. “It’s a perfectly normal reaction to say hey, Saudi Arabia, Jordan, Kuwait, you think this is a terrible problem,” Goldberg said. “You have these big air forces — we know you have them, because we sold them to you — you go deal with this.”