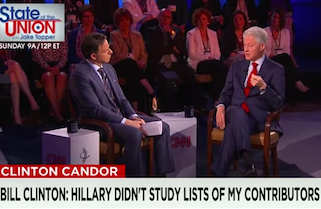 Given all of the controversy surrounding Jake Tapper’s interview with former President Bill Clinton at the Clinton Global Initiative conference this week, the CNN host made sure to stress at the top that no issues would be “off limits.” That included the donations to the Clinton Foundation that came under scrutiny earlier this year.

Asked if any of the foundation’s foreign donors received anything in exchange from the State Department while Hillary Clinton was serving as secretary of state, Clinton replied, “Nobody even suggested it or thought about it or talked about it until the political season began,” implying that the whole thing is nothing but a partisan attack on his wife’s presidential ambitions.

Even if nothing was provided to the entities who donated, Tapper asked if Clinton could honestly say that none of the contributors “sought anything” from the State Department in return. Clinton said that “you never what people’s motives are” but was “pretty sure” that people donated to causes like earthquake relief in Haiti because they wanted to help the people there.

“She was pretty busy those years,” Clinton said of his wife and her time as secretary of state. “I never saw her study a list of my contributors, and I had no idea who was doing business before the State Department.”

Tapper’s full interview with Clinton will air during his debut as host of CNN’s State of the Union this coming Sunday morning at 9 a.m. and 12 noon ET.