Jake Tapper To Gibbs: The GOP Issues A Press Release And Democrats Back Off?
video

Jake Tapper To Gibbs: The GOP Issues A Press Release And Democrats Back Off? 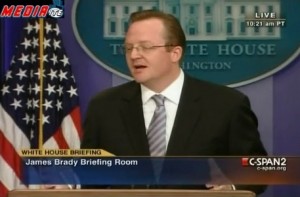 For many years, progressives have lamented the inability of the Democrats to play the kind of legislative hardball that helped the Bush administration enact a nation-transforming agenda, even though they never held anywhere near the majority the Dems currently do. That frustration was ably expressed at today’s White House briefing, as reporters quizzed Robert Gibbs on why the Democrats haven’t even introduced a bill to extend middle-class tax cuts, while allowing cuts for the wealthy to expire. While Gibbs expressed the futility of introducing a bill without the (now-requisite) 60 votes in the Senate, Jake Tapper and Chuck Todd seemed to be giving better advice for free than the Democrats have ever paid for.

Tapper distills the congressional Dems’ faint-hearted approach when he asks, “So all they need to do is issue a press release and you guys will back off any fight?” Chuck Todd, though, gives a lesson in Politics 101, asking why they don’t force a vote anyway, and get the Republicans on record voting against, or filibustering, middle-class tax cuts.

Q David Axelrod said something that the President has been saying for a long time, which is that Republicans are holding the middle-class tax cuts hostage. As I understand it, Democrats haven’t introduced a bill in the Senate and the Republicans have. Wouldn’t there have to be a bill that Republicans are threatening to block or blocking before anything is being held hostage?

Q So the posture is enough, it doesn’t have to be actual —

MR. GIBBS: Absolutely. And look — we’ve — I said this — it’s now been a couple of weeks, obviously, but we agree on the middle-class part of this or so they say. Their price tag for the middle class was the $700 billion. We could have passed the middle class alone, provided some much needed certainty to the economy and to middle-class families and had — still had plenty of time to debate the $700 billion price tag for the other cuts.

Q Why not do that? Why not introduce the bill —

Q Why not get Republicans on the record?

Q — and force Republicans to filibuster it?

MR. GIBBS: Guys, my original answer was I don’t think the bill is the existence of the fight. It is that — look, John Boehner said —

MR. GIBBS: But John Boehner said quite clearly on Sunday that he would go along with the middle-class stuff, right? Then fury rained down, and quickly we crawfished back over to, wait, wait, wait, middle class — the price for doing middle class is tax cuts for the wealthy. And we could have done middle class.

Q Isn’t the real problem the fact that there are Democrats who agree with Republicans on the issue? There are 47 —

MR. GIBBS: I think we could have done middle class, but the Republicans weren’t interested.

Q You don’t need the support of the Republicans in the House to pass anything.

MR. GIBBS: No, but to play along with your — if a bill has to become — you got to pass them in both houses, and you are not going to get 60 votes to go and just do middle-class tax cuts, were you?

Q No, but I guess my question is, why not try? If you actually think that this is a winning campaign issue —

Q You don’t know unless you —

MR. GIBBS: You were under the impression there were like six Republicans that were going to break?

Q No, but there were Republicans —

Q You have to have a bill —

Q — there were Republicans who have walked back on unemployment extension.

Q — in order to get them — why not introduce the bill?

MR. GIBBS: The existence of the bill isn’t the — isn’t some great starting line for this debate. We’ve been debating tax cuts without — I mean, a bill you could write on the back of a napkin. We could — that’s not — the notion that you didn’t have a vehicle to do this is —

Q Do you think it’s responsible to wait until the lame-duck session to do this?

Q Should Democrats stay — should the recess be canceled at this point, postponed?

Q The point is you’ve pushed through —

MR. GIBBS: This wasn’t — Chuck, when you guys are on your show debating tax cuts, you didn’t preclude — you didn’t not have that debate because there wasn’t a bill in Congress. Let’s not, like, get wrung around the pole on bill introduction semantics.

Q But the point is there certainly have been — there has been legislation in the past that the President firmly believed in and he pushed the House to vote on it even though he didn’t know whether he would be able to get the votes in the Senate. You go one step at a time. If you believe in it that strongly, you tell the House, let’s push this through. Let’s vote on this —

MR. GIBBS: There was — we can’t — Chip, look at the statements from the Senate Republicans. This wasn’t going anywhere. They had decided to stop middle-class tax cuts.

Q Neither was cap and trade, but you pushed for the House to get on the record on it.

Q So all they need to do is issue a press release and you guys will back off any fight?

Q All they have to do is say the Republican caucus is not going to support this and Democrats will just say, oh, okay, well, then we’re not even going to try?

MR. GIBBS: No, again, Jake, you’re making the existence of one piece of legislation the beginning or the end of this entire fight. I think that’s kind of a silly concept.

Q You’re talking about a bill being held hostage — it hasn’t even been written as far as anybody knows.

MR. GIBBS: Okay, the concept of tax relief for the middle class — does that make it any less of a hostage because I didn’t say it as a bill?

Q Yes, it does make it less of a hostage because there isn’t an actual piece of legislation that anybody is trying to push.

Q But you’re saying because it can’t get through the Senate the Democrats — the House shouldn’t vote on it?

Q Do you feel that you underestimated the difficulty of getting Democrats to vote for your tax cut proposal, which is middle class but not the rich?

MR. GIBBS: I don’t know how many Democrats support what. I know, Mara —

Q Well, you know how many in the Senate.

MR. GIBBS: Well, I know that — all you need to know in the Senate was you needed 60 votes to get to a bill and there’s 41 Republicans who said they’re not going anywhere. Now, I’m not great in math, but 100 minus 41 does not get you to the number, bill or not, in —

Q But that argument applies to the lame-duck session, too.

Q You’re not going to bring it up in lame duck?

Q Hold on for a second —

MR. GIBBS: No, I think — Chip, I assume it’s going to get brought up in the lame duck largely because we have until the 31st to make some big decisions on this.