Jake Tapper to Martin O’Malley: ‘Are You Responsible’ for Baltimore Unrest?
VIDEO

Jake Tapper to Martin O’Malley: ‘Are You Responsible’ for Baltimore Unrest? 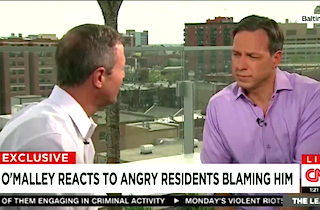 Former Baltimore Mayor and Maryland Governor Martin O’Malley longshot run for the Democratic presidential nomination got a lot longer this week as he has taken heat from all sides for setting up some of the policing tactics that led to the death of Freddie Gray. During an interview from that city on CNN Thursday afternoon, Jake Tapper asked O’Malley, “Are you responsible?”

“When you were mayor, you were tough on crime, you instituted some assertive police practices,” Tapper told O’Malley, pointing out that he has been criticized over the past days and weeks for being “too aggressive, alienating the population from the police force” and even had one resident shout at him, “F— that, he’s to blame.” Tapper asked, “Do you shoulder any of the blame here? Are you responsible at all?”

“Well, we’re all responsible,” O’Malley responded, making an effort to keep the blame from falling solely on himself. The former mayor and governor defended his policies, arguing that there are “probably now 1,000 mostly young, poor African-American men who did not die violent deaths, who would have if we’d have continued at the trajectory and level of violent crime we had before.”

RELATED: David Simon Knows the One Thing That Could Solve Baltimore’s Problems

But Tapper continued to press him, asking “Is that trade-off worth it?” and “Are we now seeing the flip side of the success you had in reducing crime?”

Quoting his high re-election vote percentages, O’Malley continued to defend the “assertive” policing practices that he said helped reduce violent crime during his tenure in the city and state. “I never once in my years at mayor ever had a single leader of a community, black or white, ever say to me, Mr. Mayor, I want less police presence in my neighborhood,” he said.