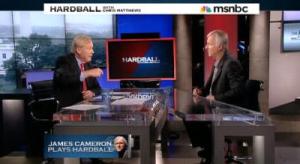 But he also hit on another Cameron favorite – Glenn Beck. Oh, and Stephen Hawking and his ‘aliens will wipe us out’ theories.

Cameron and Beck have had a war of words fairly recently, and it took Matthews bringing up the Fox News host twice to get Cameron to weigh in on him. Matthews set it up…

I’m worried about the media though. Because now we have a right-wing media available. That if you feel like, if you’re a business guy for example or a business woman, and you want to have a good excuse, a good dodge not to do anything, well you listen to someone on the right like Beck who’s willing to come in and say, ‘Oh you don’t have to do anything. These guys are a bunch of tree huggers, forget about it.’

…And Cameron knocked it down.

Guys like Beck and the others, I think they’re very dangerous to this country. And I think that some day they’re gonna have to answer to my children and to your children and their children for the world that they’re helping to create right now.

Then there was the issue of Stephen Hawking’s recent theories about malevolent aliens who will wipe us out. “I think he’s right on the money,” said Cameron, who pointed to the way other aliens, like, um, Christopher Columbus, have behaved in history: “They were, you know, converted to Christianity or whatever it was. And this has been our history. So why would we expect aliens be any different?”

Well, for one, they’re aliens, so who the hell knows. Except for James Cameron, who created Pandora and a PG-13 movie that somehow showed Kate Winslet topless.

One more quote for all the Cameron fans on the right:

We take the resources we need. We take everything. We don’t give enough back. And we’re crossing over a threshold where the Earth is not going to be able to sustain us.