James Carville Can’t Wait For The 2012 Campaign: “Get These Guys Out On The Road!” 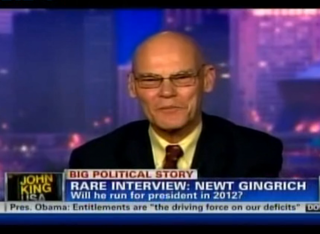 Many in the political media sphere are looking out in the distance at the 2012 elections with some level of ironic revulsion. The 2010 midterm elections fresh in mind and the 2008 presidential election being one of the longest campaign seasons in history, many are simply not ready for that level of intensity quite yet. And then there’s James Carville, who was nearly jumping out of his seat on CNN today at the prospect of Republican presidential candidates hitting the campaign trail– in Februrary 2011.

Carville was making his regular rounds on John King USA, discussing with host John King and Red State‘s Erick Erickson, today stopping by to chat about King’s exclusive interview with probably 2012 Republican candidate Newt Gingrich (Gingrich, under contract with Fox News, rarely speaks to other networks). Carville appeared excited to see Gingrich talking about the elections but, beyond Gingrich, just happy to see the campaigns so close on the horizon. “I hope he goes!” he noted enthusiastically about his possible run, “We’re just waiting on the word here.” Then he let himself daydream a little about the entire Republican landscape. “I hope John Bolton goes with him, you know, and Sarah Palin, and I’m all for it. It’s time for these guys to get out there and start campaigning.”

Later, describing Gingrich as a “very charming man” who is “itching to go” on the campaign trail, he reiterated his excitement: “This thing needs to get shaken up! We need to get these guys out on the road!” Carville also responded to Erickson’s description of Gingrich as a “brilliant ideas guy” with a compliment of sorts: “he is to ideas what the Pacific Ocean is to water.”

This level of political enthusiasm is, of course, incredibly healthy for the nation, but it just seems far too soon to be so ebullient about yet another election cycle. The panel discussion via CNN below: