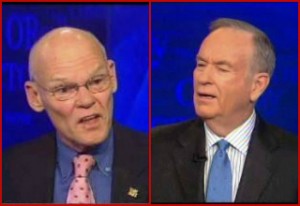 James Carville clashed with Bill O’Reilly tonight over the vast array of scandals plaguing the Obama administration, including a new revelation that the State Department allegedly covered up prostitution and drug use. Carville told O’Reilly that a lot of what people are calling scandals are not scandals, just failures and bad policies. When O’Reilly further grilled him, Carville dismissed the rampant scandal fever as coming from “people with fantasies that are trying to get them to play out.”

Carville pushed back when O’Reilly brought up the Benghazi scandal, insisting that “every e-mail has been released.” O’Reilly confronted Carville with the public denials of former CIA director David Petraeus that he was the one who told Susan Rice to “mislead the world,” but Carville stated, “It’s not a scandal.”

Carville did say the State Department allegations were serious, and they should be looked into. O’Reilly mocked the idea of just “looking into” all of these big scandals but not actually doing anything in the public interest about it. He described this wave as a “scandal du jour,” which prompted Carville to snap back, “I’ve seen people with fantasies that are trying to get them to play out.”

O’Reilly asked Carville, “Why do you take bad behavior and always point to other bad behavior?”

Finally, O’Reilly wanted to know if Carville thinks Eric Holder should resign. Carville admitted he’s not a big fan of how lax Holder has been in prosecuting the financial crisis, but deferred by saying he’s not the president and doesn’t get to make that call. O’Reilly concluded by telling Carville that all these scandals add up to “not a good situation for the Democratic party,” but Carville immediately hit back that it “can’t get any worse for the Republicans.”