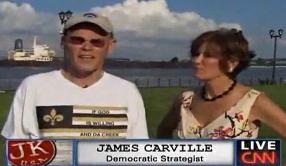 CNN contributor and Democratic strategist James Carville has been an extremely outspoken critic of Pres. Barack Obama and the administration in the wake of the BP oil spill.

But now he’s bashing defenders of Pres. Obama too – even if its his CNN colleague, Fareed Zakaria.

Zakaria, a Newsweek editor but also host of Fareed Zakaria GPS, recently wrote a defense of Pres. Obama’s response (actually he criticized the President for his overreaction). Newsbusters noted this exchange on John King USA last night. King read from Zakaria’s recent column, which said “what worries me is that we have gotten to the point where we expect the president to somehow magically solve every problem in the world, appear to be doing it and to reflect our anger and emotion. This is a kind of bizarre trivializing of the presidency into some kind of national psychiatrist-in-chief.”

Carville, smiling – but only at first – responded strongly:

Yes, he talked about an offensive linebacker. And when I read that I wanted to hit him with a football bat, okay? This guy, there’s some kind of a breakdown here, because this is a very smart man. And I don’t think that he understands exactly what is going on down here. I don’t think he understands that an entire culture is at risk, an entire way of life that there is an invasion going here and he is whining about the fact that the president had to cancel a trip to Indonesia to do something about what’s going on in Louisiana.

Carville’s purposely sports-illiterate “football bat” comment was a response to Zakaria using the term “offensive linebacker” to describe another job where you have to “suspend your rational faculties and let yourself be overtaken by raw emotions.” (Linebackers are only on defense.)

Carville wasn’t done, and turned to the idea of East Coast bias. “If that thing was in the Long Island Sound, I guarantee you Fareed Zakaria and all his friends would be going nuts out there,” he said.

It’s probably safe to say the The Ragin’ Cajun won’t need to set his GPS to Zakaria’s show anytime soon. And although Carville is speaking out specifically as a Louisianan, will these last couple weeks serve as an ‘open the floodgates’ moment for Clintonites who were late adopters to our current Commander-in-Chief? Who will be the first to speculate whether Hillary Clinton could have done a better job? 2012 could be even more fun than we thought…

(Side note: CNN.com published four minutes of the interview (also with Mary Matalin) – however none of the Zakaria exchange.)

Here’s the clip (via HotAirPundit):