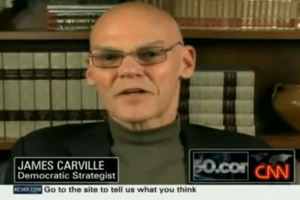 A few days ago, James Carville resuscitated a 2008 campaign joke about the respective number of testicles President Barack Obama and Secretary of State Hillary Clinton possess. This joke was about as well-received as it was in 2008 (not at all), and Carville visited John King USA to explain just how much he didn’t regret it. This apparently wasn’t enough, however, as he took his case to Anderson Cooper last night, as well, and was just as unapologetic.

Last time around, on John King USA, Carville squarely said he wasn’t sorry “and I don’t apologize.” He didn’t change his tune on AC 360º— in fact, he used almost the exact same phrasing, adding that, “to me, it’s not that big a deal” and, lest anyone think he has a conscience, “I’m not going to rehab; I’m not praying with my priest; I’m not reconsidering my life” over the joke, he explained.

Unlike last time, however, he went a little deeper in to the reasoning behind his bizarre accusation: “I thought the president should be tough on these banks.” Carville expressed his distaste with the way the bank bailouts were handled, adding that “we should have done something to show that we were unhappy with what they did,” and that he didn’t “blame” the American people for voting Republican as a way of expressing displeasure with the bank policy. That doesn’t quite explain why Carville made the joke in 2008, though he agreed with then-Senator Obama’s logic the first time he deflected the joke– Carville is not in public office, and is in the business of saying eye-catching things. “He’s right,” Carville conceded, “I’m a cable TV commentator.”