James Corden, Lin-Manuel Miranda Give Tribute to Orlando Victims at the Tony Awards 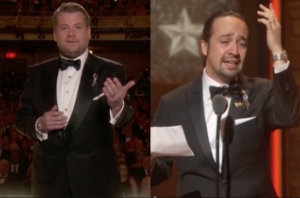 The 70th annual Tony Awards occurred last night, though there was a heavy overcast in light of the horrific events that took place in Orlando just hours earlier. Still, the show went on, and several of the night’s most prominent figures gave heartfelt tributes to the victims throughout the show.

The Late Late Show‘s James Corden was the master of ceremonies at the Beacon Theatre, and he started the show with a somber address to the shooting that left 49 dead, and over 50 more injured.

“All we can say is you are not on your own right now; your tragedy is our tragedy. Theater is a place where every race, creed, sexuality, and gender is equal, is embraced, and is loved,” Corden said. “Hate will never win. Together, we have to make sure of that. Tonight’s show stands as a symbol and a celebration of that principle.”

Later in the broadcast, Hamilton creator and star-actor Lin-Manuel Miranda appeared on stage to accept the award for Best Original Score. During his acceptance speech, Miranda presented an original sonnet about the massacre that seemed to nearly drive him to tears as he read it out loud.

These tributes and more came as follow-ups to how the Hamilton cast decided to leave out their prop muskets during their musical performance that night. The Father actor Frank Langhella also gave a noteworthy tribute to the victims, saying “I’m standing in a room full of the most generous human beings on Earth and we will be with you ever step of the way.”