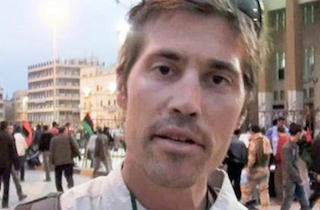 Following complaints from the parents of U.S. journalist James Foley, who was the first American to be publicly beheaded by the terrorist group ISIS, the PAC behind a New Hampshire campaign ad that uses his image to attack Democratic Senate incumbent Jeanne Shaheen has agreed to pull it off the internet.

In an interview with New England Cable News this week, John and Diane Foley called on conservative groups like Secure America Now to stop exploiting the images of their son just before he was killed by ISIS for political gain. “I think it’s a deplorable and I think there should be an apology,” John Foley said of the ad.

“It makes me very sad that people would use the brutality of our son’s death for their own political purposes,” Diane Foley added.

Initially, Secure America Now head Allen Roth defended his group’s use of Foley’s image, saying, “The image has appeared around the world millions of times” and “We meant no harm” with its use.

Senator Shaheen has denounced the ad as “disgraceful”, and her opponent, Republican Scott Brown, for whom the ad was implicitly intended to support, called it “inappropriate.”

Following the anger expressed by Foley’s parents, Secure America Now has changed course, decided to pull the ad from its online campaign and apologizing “for any pain we inadvertently caused.”

The continued in a statement:

“It has been brought to our attention that a news report image of American hostage James Foley that appeared in a Secure America Now video has upset his parents, so we have decided to take the video down. The purpose of the video was to draw attention to Washington’s failure to secure our borders from real threats by terrorists. That remains our objective and we will continue to engage in this public debate.”

Watch video below, via NECN: