James Hoffa And Ed Schultz Bond Over Tea Party Comments: ‘Let’s Call These People What They Are’ 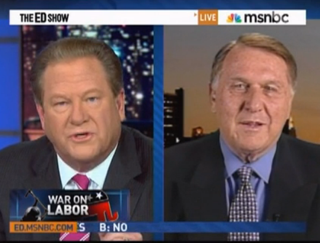 After yesterday’s comments against the Tea Party in which he encouraged an audience to “take those son-of-a-bitches out [of office, of course!],” Hoffa found himself in an exclusive interview with possibly the most sympathetic host to his cause he could find: Ed Schultz, who has made the plight of the working class a cornerstone of his program. Predictably, the interview played out like a minefield (no violent rhetoric intended!) for those on the right seeking more evidence against Hoffa, as the latter doubled down on his rhetoric yesterday.

“We’re not backing down,” Hoffa told Schultz regarding both his comments and the labor movement in general. “We’ve got the votes,” he argued, and the left needed to harvest them, as “there is a war on workers.” That war is winnable, he concluded, because “we are a mighty army– let’s march together… [and] take down every Tea Party Republican that opposes working class families.”

Schultz inquired as to the response from his voter base, which Hoffa responded had been overwhelming positive. “The phones ran off the hook from workers all day today,” he said, from people who were “tired of this namby-pamby talk.” “Let’s call these people what they are,” he argued, emphasizing that the Tea Party is “trying to take food away from people– what kind of person does that?” “You’re very proud of what you said, and a lot of people are, too,” Schultz offered to his guest.

To that end, Schultz asked whether Hoffa believed Fox News was “anti-worker.” Hoffa called the network a “parallel universe,” asking, “the people they have over there, the Glenn Becks, the O’Reillys and those people… what are they talking about?” As an avid fan of Ed Schultz, it is excusable for Hoffa not to have gotten the memo about Glenn Beck and Fox News.

Then, in a final, bizarre turn of events, Schultz asked a favor of his guest, who had been invited, somewhat contentiously, to be a guest on Hannity: don’t go on Hannity if Sen. Marco Rubio doesn’t come on the Ed Show (an invitation extended to the Senator in a segment laden with language problematic in itself for different reasons). Hoffa said he’d “see what I can do,” to which Schultz noted, “there’s a man who sticks to his guns!” almost as a bonus metaphor for conservatives to parse tomorrow.