James O’Keefe Defends His Work: In Business, ‘You Simply Don’t Have An Expectation Of Privacy’ 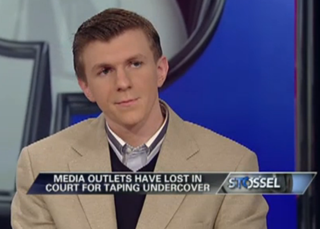 The parallels between right-wing undercover dance-pop sensation James O’Keefe and left-wing (?) hacker/fashion icon Julian Assange have been long drawn out, but with every new interview the similarities become starker. O’Keefe visited John Stossel on his eponymous FBN program to defend his tactics and asserted that, since “the public has a right to know… you simply don’t have an expectation of privacy when you’re discussing business matters.”

Stossel, no stranger to undercover journalism, welcomed the filmmaker to give him a chance to explain why he perceives his work to be necessary to the health of the republic. “It takes creativity and courage,” O’Keefe noted modestly, “and we think that’s something lacking in the mainstream media.” Stossel pondered why O’Keefe had not taken too much grief from detractors about privacy concerns, given that places like the ACORN office or meetings with NPR executives created “an expectation of privacy.” O’Keefe noted that most places to which he had gone were public– restaurants or government offices– and that in those situations “you simply don’t have an expectation of privacy.”

“It’s not like we were planting devices in people’s homes,” he added, concluding that, when tax dollars are at play, “these tactics are perfectly justified.” Not exactly the extreme, “everything is public” view Assange proposes as tax dollars appear to be the focal point on which O’Keefe judges his behavior (Wikileaks goes after private enterprises as well), but that’s a necessary ideological rift, not particularly one of execution. They’re not twins– just mirror images. So when O’Keefe delves into his legal woes, he doesn’t sound exceptionally less aggrieved. “They did everything they could to destroy us,” he notes, highlighting the absurdity of his legal charges– “entering a government building under false pretenses.” “If it’s criminal to pose as something you’re not inside a politician’s office, then I guess we might as well arrest half the politicians in Washington, DC and half the lobbyists in Washington who use false pretenses every day.”