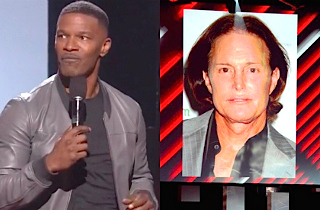 Jamie Foxx hosted the IHeartRadio Music Awards Sunday night and has spent much of the next morning taking heat on Twitter for a joke he made at Bruce Jenner’s expense.

“We have some groundbreaking performances here too tonight,” Foxx said in his monologue. “Bruce Jenner will be here doing some musical performances. He’s doing a his and her duet all by himself.”

“Look, I’m just busting your balls while I still can,” he added to a mixture of groans and applause from the audience, which included Kylie Jenner, the Olympian-turned-reality star’s teenage daughter.

The tweet that seems to have set off the firestorm over Foxx’s joke came from Perez Hilton, who accused NBC of airing “transphobic” jokes. Jenner has been rumored to be transitioning into a trans woman, but has neither confirmed nor denied that supposition.

Boo! Shame on you #iHeartAwards for allowing @iamjamiefoxx to be transphobic on national television! Those #BruceJenner jokes were wrong!!!

RELATED: Kendall Jenner: I Never Spoke to Us Weekly About My Father’s Transition

In the hours since, many more have expressed their disappointment in the way Foxx framed his jokes:

Wow! Totally not feeling Jamie Foxx right now… he is being so MEAN! #iHeartRadioMusicAwards the bruce jenner slam was NOT COOL!

Jamie Foxx's transphobic jokes at the iHeartRadio about Bruce Jenner were gross, glad they didn't garner much laughs

Jamie Foxx disrespecting Bruce Jenner's transition(which may or may not be real) is not okay. what was said was disrespectful and disgusting

Foxx has not yet addressed the backlash publicly on social media and has not responded to requests for comment.