Janay Rice Describes Confronting Ray Rice: ‘Why Did You Just Leave Me There?’ 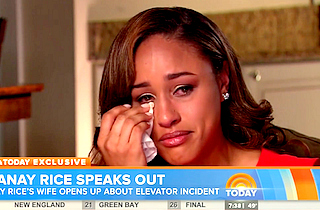 Janay Rice talked to Today show’s Matt Lauer in an interview that aired Monday morning, telling him she had not seen the second tape that ignited the national controversy, and that she had forgiven her husband for the mistakes he had made.

“You can’t make excuses for anything, but we were highly intoxicated,” Rice said. “In the moment, you’re not thinking about, oh, my god, I’m on camera in an elevator. So, of course people are going to read into everything and pick at everything about this situation. We understand that.”

Rice’s mother, who was also present for the interview, said she had seen the video and that it made her “sick.”

Lauer asked about the first video, which Rice said she had watched, in which she is seen left on the ground after being knocked unconscious.

“I asked him, after I saw it, why did you just leave me there?” Rice said. “He said he was terrified. He was in such shock that this had just happened that he didn’t know how to function.”

The most emotional part of the interview came when Lauer asked after an angry Instagram post in which Rice excoriated the media for its focus on the case. “I was so angry,” Rice said, tearing up. “The man that I loved had everything ripped up from under him. The support system I thought we had in the Ravens, that made me angry. That fact that I knew we wouldn’t be here any more. We had to pick up and move our child from what she’s used to. It hurt.”

The second half of the interview will air tomorrow morning.