Janeane Garofalo: Someone Must Be Paying Herman Cain To Deflect GOP’s ‘Inherent Racism’ 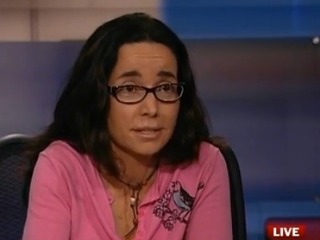 Actress and comedian Janeane Garofalo paid a visit to Keith Olbermann‘s Countdown to discuss her “theory” regarding GOP presidential hopeful (and Pokemon fan!) Herman Cain. Does it have to do with race? Why, yes! Of course!

Now, I believe Herman Cain is in this presidential race because he deflects the racism that is inherent in the Republican party, the conservative movement, the Tea Party, certainly. Over the past 30 years, the conservative movement has been moving more and more to the right but also race-baiting more, gay-baiting more, religion-baiting more. But Herman Cain, I feel like he’s being paid by somebody to be involved and to run for president so that they can go, “Well, yeah, they can’t be racist! It’s a black guy! It’s a black guy asking for Obama to be impeached! Or “it’s a black guy who’s anti-Muslim!” Or “it’s a black who’s a Tea Party guy!” And I feel like, well, wouldn’t that suit the purposes of whomever Astroturfs these things? Whether it be the Koch brothers or ALEC or Grover Norquist or any religion, any anything. It could even be Karl Rove. Let’s get Herman Cain involved so it deflects the obvious racism of our Republican party.

So, to recap: The Republican Party and, in fact, the entire conservative movement is one that is inherently racist. There is no conservative — black, white or otherwise — who can join the movement and not be racist, because the entire enterprise is inherently racist. But accusing a black Republican of essentially acting as a “race traitor” by selling himself to some sort of shady and nefarious Illuminati-like group monitoring the party from their secret lair hidden deep inside an inactive volcano, perhaps whilst gently stroking an endangered wild cat, is not racist. There is no way Cain can be acting as an autonomous individual, or that factors other than race — like religion or social class or occupation or personal experience — can help mold an individual’s political beliefs.

There is one point where Garofalo has evidence backing her up, though. According to a 2010 Gallup poll, self-described conservatives increasingly outnumbered those who described themselves as moderate or liberal, both within the Republican party and in general. The Centrist Party website, however, maintains that 70 percent of American voters are moderate in their views, with the 15 percent on either extreme nonetheless dictating the national discourse.

What do you think of Garofalo’s theory? And do you find the Republican party veering ever right-ward? Is racism inherent in the the Republican Party? What steps could the Party take to change this perception, in your eyes?

Take a look at the segment for yourselves, via Current: