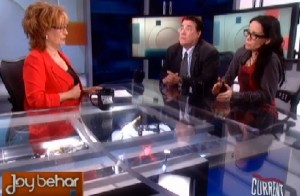 The incident in which The Daily Caller reporter Neil Munro heckled President Obama in the middle of remarks on an immigration policy change has led to renewed discussion of the pattern of disrespect directed at our first black President. On Tuesdsay night’s edition of Current TV’s week-long Joy Behar Show preview, actress and activist Janeane Garofalo diagnosed the problem, telling host Joy Behar that, despite the popular narrative, “We are not a post-racial society.”

Garofalo is a popular object of scorn (and worse) from the right-wing blogosphere, a position that was solidified by her 2009 rant about racism and the Tea Party, which was heavy on conclusions, but light on supporting facts. The story of race and the Tea Party is not a simple one.

She later doubled-down on to Fox News’ Griff Jenkins, silencing him by asking, if the Tea Party were really so concerned about profligate government spending, where were they for 8 years under President Bush?

Given that history, Garofalo’s comments to Behar were relatively tame. Behar began by drawing a contrast between the way critics and comics talk about a president, and they way presidents should be treated in person.

“When Bush was in office and I was doing stand up,” Joy said, “I was all over him. And I would make cracks about him all the time.”

“But if I was sitting with him,” she continued, I would not be disrespectful. I think that’s the difference. Its like, yeah, we can talk about them any way we want when we’re talking about them. It’s a free country and that’s my First Amendment, but you have a certain amount of respect for the office and for the person when he is actually in the room with you. That’s where they’ve gone over the line.”

Garofolo made the excellent point that all presidents are not created equal. “There’s a big difference between criticizing George Bush and the things he did, and criticizing Barack Obama,” Janeane sad. “George Bush was certainly very criticism-appropriate for a lot of things he did.”

“Now, Barack Obama has done a lot of things I would criticize as well,” Garofalo added. “This is different. And I don’t understand why so many people are reticent to discuss race in this country. We are not a post-racial society.”

“No, not yet,” Behar interjected. “Not in our lifetime.”

“And I’m pretty sure we probably never will be,” Garofalo said. “And we’re not post-misogyny either. Until the human condition changes, we won’t be.”

If anything, the Obama presidency has been a boon to outlets like The Daily Caller, eager to capitalize on racial resentment and white panic over imaginary black menaces like The New Black Panthers and their non-existent “connections” to our first black president. Their successful exploitation of racial resentment has been aided by the mainstreaming of the conservative notion that “the worst thing you can do” is call someone a racist (worse than actually being racist), a sense of victimization that many conservatives blame Janeane Garofalo for, as if they’re powerless against the unalloyed power of the girl from The Truth About Cats And Dogs.