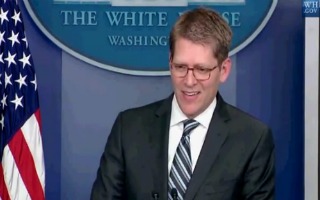 White House Press Secretary Jay Carney and CBS’ White House Correspondent Norah O’Donnell got into a heated exchange over just how precedented a ruling by the Supreme Court overturning all or part of the Affordable Care Act would be.

O’Donnell asked Carney whether President Obama regretted using the word “unprecedented” on Monday, since it seemed that the President was walking back his comments a ruling by the Supreme Court finding portions of the Affordable Care Act unconstitutional had no precedent.

“Not at all,” said Carney, unhesitatingly. “Only because a handful of people didn’t seem to get what he was referring to – of course, he was referring to the fact that it would be unprecedented in the modern era of the Supreme Court, since the New Deal-era, for the Supreme Court to overturn legislation passed by Congress designed to regulate and deal with a matter of national economic importance like our health care system.”

Carney continued to explain that the President “did not suggest – did not mean and did not suggest – it would be unprecedented for the Court to rule that a law would be unconstitutional. That’s what the Supreme Court is there to do. But it has under the Commerce Clause deferred to the Congress on matters of national economic importance.”

Fox News Channel White House Correspondent Ed Henry requested clarification, saying that the president did not specify what specifically would be unprecedented in the event the Court finds against the government. At the time, the President merely stated that such an action would be “unprecedented.”

“That’s not what he said, Ed,” said Carney. “And it’s not certainly what he meant. And it’s clear to most folks who observe this and understand what is at issue here…”

At this point, O’Donnell interjected, “Jay, that’s not true.” She went on to cite two federal laws which the Supreme Court had struck down specifically because they were justified by the Interstate Commerce Clause, US vs Lopez and US vs Morrison. “These are very specific legal issues. It’s not evident to everybody,” said O’Donnell.

“It may not be evident to you,” Carney responded. “What [President Obama] made clear yesterday — and he was a law professor, and he understands constitutional law and constitutional precedent and the role of the Supreme Court — was a reference to the Supreme Court’s history and it’s rulings on matters under the Commerce Clause.”

In Lopez, the Commerce Clause was used by Congress to justify regulating firearms inside school zones. In Morrison, which was heavily informed by the decision in Lopez, portions (though not all, as O’Donnell attests) of the 1994 Violence Against Women Act were struck down because they relied on the Commerce Clause to justify stiffer penalties for crimes against women – in this case, a rape.

“[E]ven [our] modern-era precedents which have expanded congressional power under the Commerce Clause confirm that this power is subject to outer limits. In Jones & Laughlin Steel, the Court warned that the scope of the interstate commerce power ‘must be considered in the light of our dual system of government and may not be extended so as to embrace effects upon interstate commerce so indirect and remote that to embrace them, in view of our complex society, would effectually obliterate the distinction between what is national and what is local and create a completely centralized government.’”

Perhaps the greatest problem that the Court faces is the elasticity of the Commerce Clause. Even in Rehnquist’s opinion in Morrison, he notes that the oft-cited New Deal-era Wickard v. Filburn case could not settle the true nature of the Commerce Clause which will always be subject to interpretation by Congress.

“[S]o long as Congress’ authority is limited to those powers enumerated in the Constitution, and so long as those enumerated powers are interpreted as having judicially enforceable outer limits, congressional legislation under the Commerce Clause always will engender ‘legal uncertainty’”

O’Donnell is correct, in that the Court has struck down overreaching federal laws that relied on the Commerce Clause as their legal basis. While only part of the Violence Against Women Act was overturned by the Court, and in that sense O’Donnell was incorrect, that will be cold comfort to supporters of the Affordable Care Act when the Supreme Court cites both Morrison and Lopez in the opinion striking down the unconstitutional individual mandate.

Watch the confrontation between Carney and O’Donnell below via The White House: