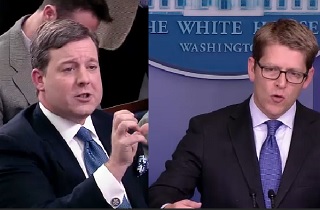 Rep. Darrell Issa (R-CA) is holding hearings in Texas, today, on the role of navigators in the rollout of Obamacare, with a particular focus on stories featured in a series of sting videos by conservative activist James O’Keefe. At Monday’s White House daily briefing, Fox News’ Ed Henry asked Press Secretary Jay Carney about those incidents, and Issa’s hearing. Carney responded with a blistering rebuke to Republicans who are “attacking” navigators in an effort to “sabotage the Affordable Care Act.”

Henry noted that Rep. Issa is “a critic of the administration,” and asked about allegations that “some of the health care navigators that try to help people sign up for the new law, in some cases, they allege, have committed fraud, and told people ‘Lie about your income so you can get better subsidies,’ and that there’s not proper background checks of some of these people to see that they can actually be trusted to guide people. What’s the reaction here?

With an exasperated pause, Carney replied “This is just one more data point in the Republican obsession with sabotaging Obamacare,” adding that “All health care navigators must complete about 20 hours of training, including training on privacy issues,” and receive “regular refresher training.”

Carney read the navigator requirements in further detail, then turned his attention to the Republicans. “Let’s pull back here for a minute,” Carney said. “When Republicans attack navigators, they’re attacking folks like the University of Arkansas, the Epilepsy Foundation of Florida, the Visiting Nurse Services of Iowa, Ascension Health, Ohio Association of Food Banks, and the National Urban League. These are just a few of the organizations that actually hire and supervise these navigators.”

He concluded with an emotional appeal to “put faces to the name ‘navigators,’ here. These are folks in communities, working for organizations like the ones I discussed, who are doing something very simple, but important: helping their fellow community members get the information they need, if they seek to enroll and purchase health insurance, for many of them, health insurance that they have not had in the past, that’s quality and affordable coverage.”