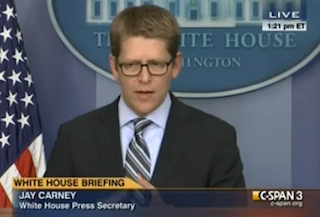 White House Press Secretary Jay Carney attempted to clear up any lingering “confusion” over the question of delaying the Affordable Care Act’s individual mandate during his daily briefing Thursday. Answering a question from CBS News’ Major Garrett, Carney confirmed that the “individual mandate timing has not changed.”

Garrett asked Carney if the change, which would move the deadline for people to sign up for insurance with penalty from February 15th to March 31st, would require congressional approval or if it falls within the Health and Human Services department’s jurisdiction. “I appreciate the question because I know there was some confusion last night,” Carney said, perhaps referring to the NBC Nightly News report about a delay to the individual mandate and subsequent denial by White House Deputy Press Secretary Josh Earnest.

“The individual mandate timing has not changed,” Carney said emphatically. “The deadline for signing up for insurance was and is March 31st.” He said what the administration has been working on is “aligning the deadlines for enrollment and enforcement,” which would mean someone could enroll by March 31st and avoid the penalty even if that insurance has not yet become active. “In other words,” Carney said, “if you have insurance by March 31st, because you’ve purchased but it has not kicked in, you should not be penalized.”

“A lot of reporting on this has gotten ahead of the actual facts,” Carney said, adding that the “guidance” from the White House meant to resolve the issue “has not been finalized.” He said it is his “understanding” that the change will not require any action from Congress.