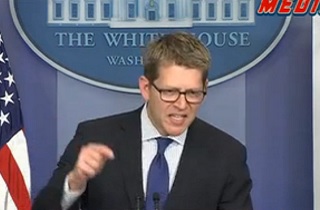 White House Press Secretary Jay Carney has become increasingly animated and explicit in his pushback against some reporters, and at Monday’s daily briefing that trend continued with a lively exchange in which Carney openly mocked and mimicked ABC News Chief White House Correspondent Jonathan Karl.

Along with Fox News’ Ed Henry, Karl has been on the receiving end of some vociferous pushback from Carney these past months, but that dynamic evolved into open contempt Monday, as Karl attempted to catch President Obama in an inconsistency regarding Healthcare.gov, the troubled portal for Obamacare. Several weeks ago, the President spoke about the law, and Karl keyed in on this passage:

We’ve also added more staff to the call centers where you can apply for insurance over the phone. Those are already — they’ve been working. But a lot of people have decided first to go to the website. But keep in mind, these call centers are already up and running. And you can get your questions answered by real people, 24 hours a day, in 150 different languages. The phone number for these call centers is 1-800-318-2596. I want to repeat that — 1-800-318-2596. Wait times have averaged less than one minute so far on the call centers, although I admit that the wait times probably might go up a little bit now that I’ve read the number out loud on national television. (Laughter.)

But the point is the call centers are available. You can talk to somebody directly and they can walk you through the application process. And I guarantee you, if one thing is worth the wait, it’s the safety and security of health care that you can afford, or the amount of money that you can save by buying health insurance through the marketplaces. (Applause.)

But you don’t have to just go through the phone. You can also apply in person with the help of local navigators -– these are people specially trained to help you sign up for health care, and they exist all across the country, or you can go to community health centers and hospitals. Just visit LocalHelp.HealthCare.gov to find out where in your area you can get help and apply for insurance in person.

Karl asked if the President knew, as newly-released memos state, that phone and paper applications would face the same challenges as online applications when he made that statement.

“Jon, as you know,” Carney began, “the answer is yes, as was reported widely at the time. The whole point is that CMS is processing paper applications through Healthcare.gov, but it bypasses the need to create an account, creating an account was what led to the bulk of issues for users in the initial days.”

He added that “In terms of the user experience, the whole point was to alleviate the frustration that so many Americans were having online.”

“I know it’s spoken in tones of dramatic revelation,” Carney continued, “but it was a known fact at the time. We never pretended otherwise.”

“That’d be that tone I was talking about,” Carney cracked.

Karl soldiered on, punching certain words for emphasis. “I’m going to go back to what the President said, he said you can bypass the website, and apply by phone or in person, and it could be done in 25 minutes, but these memos say that ‘at the end of the day, we are all stuck in the same queue, we all have to go through the same portal.'”

Carney responded by mimicking Karl’s diction and mannerisms, saying, “Jon, I get it, but the person who calls isn’t the one who continues to wait after the paper application is filled.”

“Your mocking is entertaining,” Karl said, “but the President said you can apply within 25 minutes, that’s not true.”

Karl and Carney continued to argue over what appears to be a distinction between the words “enrollment” and “application.” As Karl stated, a completed enrollment would have to go through Healthcare.gov no matter how it was submitted, while Carney argued that by using means other than the website to submit the application and begin the enrollment process, users were spared the time and difficulty of the website. Throughout the rest of their exchange, Carney continued to jab at Karl over the line of questioning, telling him, “You can have this soliloquy by yourself,” and concluding “I think everybody else here understands what I’m saying. I’m sorry I can’t say the same for you.”

Here’s the clip, via the White House: