Jay Carney Reacts to Gates’ Book: What You Get When You Pick a ‘Team of Rivals’
VIDEO

Jay Carney Reacts to Gates’ Book: What You Get When You Pick a ‘Team of Rivals’ 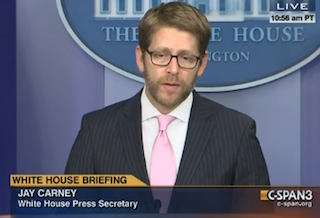 Elaborating on the official White House statement released last night, Carney said Obama “greatly appreciates the advice and counsel” of his vice president and these types of disagreements can be expected when pick a “team of rivals” to fill your cabinet.

RELATED: WATCH: Nobody at Fox Has Actually Read Gates’ Memoir but They Sure Have Opinions on It

“When it comes to the internal inner-agency process, the president expects it to be robust,” Carney said of the evident differences of opinion between Gates and Obama on Afghanistan strategy. “And he expects to hear competing points of view from every member of his national security team.”

“A lot of you wrote about or talked about at the time that the president picked a team of rivals,” Carney continued, using a term that was popularized by historian Doris Kearns Goodwin in her book about Abraham Lincoln

. “And when you pick a team of rivals, you do so in part because you expect competing points of view and competing opinions. And that’s very much what the president expects in foreign policy and domestic policy and that’s what he gets. And he’s grateful for it.”